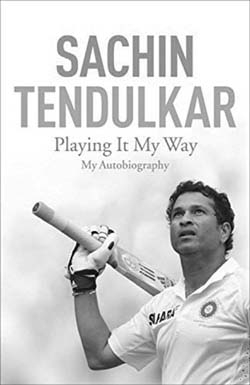 Most people tend to view autobiographies ambivalently partly because there is something narcissistic about them and partly because you do wonder, from time to time, if you are really interested in all the details of someone else’s life. Also, the best autobiographies are usually insensitive to the people who figure in them and the worst ones are a dead bore because they hold back so much. Problem is, it is only after purchasing them that a reader finds out.
The two autobiographies under review here fulfil the criteria, one each. Sachin Tendulkar has written a disappointingly flat account of his life. Naseeruddin Shah, on the other hand, has written a very racy account of his life. No holds are barred, although you do get the sense occasionally that he is trying his best not to go the whole nine yards.

Tendulkar’s book is almost entirely about the matches he took part in. This is fine if you are a cricket buff. You want to know what actually happened, rather as you would if you were a war buff, when you would want to know all the details of battles.
However, Tendulkar has millions of followers who know nothing about the game. But they have passion and would expect some of that to show in the book. Instead, that’s the one thing that is missing from it. Also, his assessments are designed to avoid everything controversial. There is virtually no cricketing gossip in it. Since much of his life has been written about, one expected a different fare. But alas, Tendulkar has chosen to stick to the straight and narrow.
On the whole, though, if you are going on a long trip, you are better off with Shah’s book than Tendulkar’s, which can be kept in the car to browse through tedious trips into town. It is great to dip into from time to time, but not such a riveting read that you would find it hard to put it down. That’s a pity because his batting was just that—utterly riveting.
The opening paragraph of a review of Tendulkar’s book by Harsha Bhogle, the highly voluble cricket commentator, justifies the blandness by saying, ‘The prerogative of telling a story belongs to the author and no one else and so you cannot complain about what he doesn’t want to tell you.’ Well, correction: you can complain as much as you want but this is what you are going to get.
It is almost as if Tendulkar lacks a sense of humour, which is far from being the case. Even Pranab Mukherjee’s autobiography is less boringly written. At least, unlike Tendulkar’s, Mukherjee’s account can be taken with a pinch of salt. No such luck with Mr Tendulkar. He tells it like it was but is careful, most of the time, to state his opinions in very mild terms.
Even about Greg Chappell, who rubbed up the entire Indian team the wrong way, and about whom Tendulkar seems to have had the strongest reservations, he makes sure that he keeps his voice down. Tendulkar the Man is captured perfectly by the tone and content of his biography. Buy it, read it but don’t expect to be as enthralled as you were with his bat.
Mr Shah, on the other hand, rocks. He can write. He can tell a story. He can pick the bits that will hold your attention. In short, his book is a super read, which starts with his schooldays and ends abruptly, for no obvious reason, sometime in the 1980s. He tells an almost no-holds-barred story which keeps you spell bound from page one to page 272. Only two close family members are missing from it: his two sons. He is also very funny.
Given how mishap prone he was he seems to have led a charmed life. There were one or two embarrassing moments like a marriage that failed, a daughter whom he more-or-less abandoned till much later in life of whom he says this: ‘I have no idea in what sort of light I will appear if I say that for an unconscionably long time I felt nothing whatsoever for the child Heeba, but it is necessary that I confess it.’
He also had a fondness for mild drugs that at the time—1960s and early 1970s—were regarded as taboo by the older generation. He was once stabbed in his back with a knife by his best friend when he was lunching at a dhaba. He admits that he ‘was trouble, unreasonable, opinionated, hot-headed, and a dope-smoker’. He makes no attempt to present himself as a nice guy, which he seems to be. The self-deprecatory tone of the narrative only enhances the charm of the book.
Unlike Tendulkar, Shah doesn’t care to be bland. He pinches, punches and pokes with unselfconscious vigour in which there is no venom at all. It is what Shah thinks and it is what Shah says. No big name escapes his scalpel: Alyque Padamsee, Satyadev Dubey, Basu Bhattacharya, Ebrahim Alkazi, Peter Brook all get their comeuppance. The only person he is kind to is Shabana Azmi because she was nice to him when he was a nobody and she a star. Remember Dungrus in Mandi, that odd-character in shorts running errands for a bunch of tarts in a brothel where he was born? Shah played that role to perfection but it finds no mention in the book.