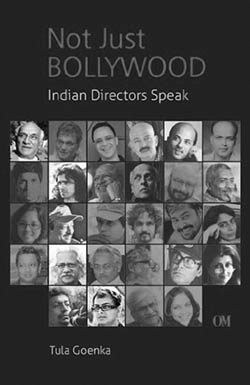 In a quasi-romantic and quasi-realist statement, ‘much to my disappointment, the shelves were full of texts on Hollywood and European filmmakers with nothing substantial on contemporary Indian directors’ (p. 10), Tula Goenka states, clearly, her objective behind writing the book, recovers directorial voices that contribute heavily to the process of filmmaking but still remain unheard. Interestingly, this attempt, to recover unregistered domineering voices, places Goenka in the vicinity of the subaltern studies circle

.
.
The scarcity of texts written on and about the contemporary Indian filmmakers, undoubtedly, handicaps the scholarly pursuits of many who seek to understand contemporary Indian cinema beyond the realm of ‘just Bollywood’. The book explores the diverse ways of storytelling that contemporary filmmakers adopt which makes them unique and how the differences in storytelling earn the Indian film industry the recognition of being the largest film industry in the world. Tula Goenka, Professor at S.I. Newhouse School of Public Communications at Syracuse University records the interviews of 28 film directors through a series of conversations which are catalogued in five different sections, viz. North, South, East, West and The World. Further, the first section titled ‘North’ is subdivided into 3 parts namely, ‘Bollywood or Popular Hindi Cinema’, ‘Parallel to Middle Cinema’ and ‘Indie or Multiplex Cinema’. The book poses a challenge to the position of Bollywood as the true representative cinema of the nation and ‘explore the entire gamut of Indian cinema, not just Bollywood’ (p. 31).
The stereotypical belief that Bollywood with its hypnotic songs and spectacular dances present the real face of Indian cinema has been rooted so deeply in the psyche of the people all over the world that it is difficult to notice the different practices of filmmaking adopted by different filmmakers in India. Goenka aims to underline the multiplicity as well as ingenuity of Indian cinema by interviewing directors not only from Bollywood but also from other regional cinema such as Malayalam, Kannada, Bengali and Marathi. In the course of these interviews she often engaged with the meta-narrative of Bollywood and how it eclipsed the ingenuity of regional films. When asked how regional cinema gets affected Adoor Gopalakrishnan responds,
But elsewhere in the country, while offbeat films do get made and written about, they don’t reach the people. The film industry all over is such that it doesn’t allow anything other than what is most conventionally consumed. But things are getting more and more difficult even in Kerala (p. 321) .
The book cleaves into two distinctive parts. The first is an overview or rather a microscopic account of the evolution of Indian cinema from the 1950s till the present time. The second part is what can be considered a compendium of Indian filmmaking through the interviews conducted upon 28 film directors that more or less covers India geographically. The policies of the Indian Government on films, the coming of Central Board of Film Certification, impose certain rules and regulations on film production and distribution. There have always been debates around the need for certification of films ‘which many consider a hindrance to free speech and expression’ (p. 15). Goenka discusses the impact of such intervention of Indian Government with various policies on Indian cinema over the years.
In the first part, Goenka discusses at length how Indian cinema not only undergoes many changes but also how it strived to establish itself in the face of many strong forces and challenges. The recognition of moviemaking business as an ‘industry’ by the Indian Government makes it possible for filmmakers to improvise their films qualitatively and also experiment with new technologies which gives the audience a totally new and refreshing taste of Indian cinema.
The second part covers about 80% of the book which is further divided into five sections based on the cultural and geographical inclinations of a filmmaker, viz. North, South, East, West and The World. Goenka spends more time on the first section which comprises interviews of filmmakers such as Yash Chopra and Shyam Benegal. The first section which is devoted to filmmakers from the Hindi-speaking belt of India seeks to understand how the cultural and political contexts of North India are projected in their films.
The last section titled ‘The World’ on diasporic filmmaker Mira Nair offers another view of Indian cinema. With the huge number of Indians living in other countries, there is always a longing for ‘home’, a sense of closeness to Indian culture and it is in cinema that they find solace. The universal issues such as search for identity, sexuality which Mira Nair takes up in her films indicates the globalizing of Indian cinema. This section manages to give a global nature both to the book as well as Indian cinema.
The way the author organizes a group of filmmakers under one category and another group in a different category based on their styles of storytelling and also based on the specific cultural and political contexts of their films is quite splendid. The book is well organized in its structure and informative with the factual details about each filmmaker provided at the end of each chapter.
However, one drawback about the book is that some of the questions the interviewer poses do not attribute much to the author’s quest in elucidating the pertinent issues about Indian cinema. One example is the first question asked to Farhan Akhtar about how he feels to have become ‘the thinking women’s sex symbol. At some point, the interviewer asks some questions that could perhaps be better left just as the filmmaker’s personal experience, as in the question asked to filmmaker Mrinal Sen about his experience as a Member of Parliament few years ago.
The book is an attempt to sieve authentic voices from the melee of voices claiming to be authentic. Goenka’s book not only records interviews but also deconstructs some of the misconceptions around Indian cinema.

Krispa Ningombam is pursuing MPhil at the Department of English, University of Delhi, Delhi.