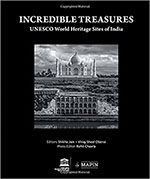 Growing up in the seventies, we cut out any bit of coloured paper that we came across, usually from advertisements in magazines, and all kinds of pictures from our black-and white newspapers: one never knew when something might come in useful for a school project or to add a dash of zing to a birthday gift wrapped in plain brown paper. Pictures, even in B&W, of monuments and animals were particularly treasured; besides collecting them against the proverbial rainy day, we spent hours looking at them. And the rare coffee table book, espied in some hallowed environ, was a magical object that could enchant one for hours. Perhaps it is that childhood fascination that, even in a world as saturated with images as ours now, the two books under review made my eyes light up as I opened the package, and compelled me to drop whatever I was engaged in. By the time I settled down to actually read the books, I had feasted on the absolutely glorious photographs more often than I can remember.

Incredible Treasures is a compilation of the World Heritage Sites in India, with a brief introduction to the concept of world heritage as it was conceived by the United Nations, and the story of how various sites came to be inscribed on the list. Originally, the cultural sites were meant to highlight archaeological and architectural heritage, but the concept has grown to accommodate sites of historical-cultural significance as well. Natural heritage sites in India include the Great Himalayan National Park, the Western Ghats (a cluster of locations that together constitute one site), the Sundarbans, and sanctuaries like Manas, Kaziranga and Keoladeo. Interestingly, one of these, Keoladeo, is actually a man-made lake which began to attract vast numbers of migratory birds. A third category, Mixed Sites, added later, features such things as the Himalayan Railway (in three locations) and the Khangchendzonga National Park which, besides being a spectacular geographical region, is of deep religious significance.