Autobiography of a Different Kind 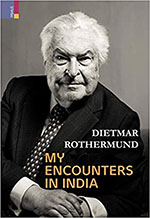 The uniqueness of the book under review rests on the way the author has captured modern India—especially of the last six decades—through pen sketches of distinguished men and women whom he met and was most touched by. This tome is a collection of such reminiscences of people of various hues, very well known or hardly known outside their cloisters, from the fields of politics, academia, business, bureaucracy, public life and the like. The fact that it is not a conscious attempt at chronicling the rise of a modern nation, but that it is a tapestry of real-life stories and incidents—warmly recollected and deftly woven—makes the book enriched and interesting.

Dietmar Rothermund is a noted scholar and writer who was called to a chair in South Asian History at the University of Heidelberg that he held until 2001. He studied Philosophy and History, and between 1960-2012, spent about eight years in India on various assignments when he met some of the most interesting personalities from Jawaharlal Nehru to a life scientist like Vishwas Sarangdhar. The prologue is aptly titled The Author as a Witness of His Times and the epilogue as Memories of My Life in India. All combined, it emerges as the author’s autobiography, revealed through many meaningful and, often, brief encounters.

As a young German school boy, he wrote a letter to Nehru in 1951, impressed by his autobiography and his speech as the President of the Indian National Congress in 1929 where Nehru had pointed out that ‘India has successfully achieved a cultural balance but had failed in creating social equality.’ This insight was unusually sharp for a young lad from Germany. Rothermund met Nehru in 1961, before Nehru’s deepest conviction, that China, being an anti-imperialist power, would never go to war, was shattered.