Between Biography and Memoir 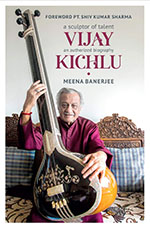 It is not often that biographies of living persons are written. Vijay Kichlu (now in his 90s) is a fine classical vocalist and teacher but he chose to be an administrator, leading and giving shape to the  Sangeet Research Academy, the ITC sponsored institution in Calcutta. He retired many years ago but clearly his friends, disciples and loyalists in the SRA wanted a record of the achievements. Meena Banerjee, the biographer, a well-known music critic has produced an engaging, appreciative account which although worshipful at times, has enough candour to make it a lively read. She has pitched it between an autobiography and a memoir where Kichlu’s public life has been faithfully recounted from his perspective.

The story of SRA began when the (still) British controlled Imperial Tobacco Company, the corporate giant, appointed its first Indian Chairman Ajit Haksar. The relationship of the arts with the state and corporations in post-Independence India can be told in two ways. There is the history of sociabilities. Indian capital and the high life spawned by corporates is the stuff of legend. Membership to exclusive clubs, golf weekends, smart restaurants which served continental food, spacious flats in tony localities (Malabar Hill in Bombay, Alipore in Calcutta) and summer vacations in the mother country (England). Corporates mingled with ICS officers over bridge in the Gymkhana, the culture was sophisticated, the relationship with the newly independent state was mediated through leisure, camaraderie and some good will. Everyone was upper caste and spoke English. The Hindu elite who inherited the mantle of the Raj were buoyant and confident—the British had finally been shown the way and they felt in control. Patronage was the second theme in this story and the ideological aspirations that undergirded it have been brilliantly analysed by David Lelyveld in a scholarly essay (1994). The state set up the Sangeet Natak Akademi and BV Keskar, the Information Minister made AIR and Hindustani music the vehicle for the unfinished agenda of Hindu nationalism. Among other things, classical music had to be saved from sybarites (Princes), illiterates (Ustads) and disreputables (Baijis).