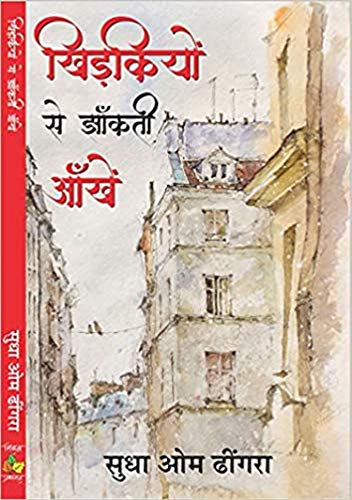 Sudha Om Dhingra is an Indian diasporic writer from Jalandhar, Punjab who currently resides in North Carolina, USA. The book under review is a stirring anthology of short stories titled Khidkiyon se Jhaankti Aankhein. In the eight vignettes included in the anthology, Dhingra looks at various aspects of life abroad and the dilemmas which surround every being and story. Dhingra skillfully crafts every story which traverses many plains and touches upon ideas related to migration, family, nostalgia and traditions which seem to have been altering in the current times.

Being a diasporic writer, Dhingra’s stories inevitably invoke the idea of nostalgia towards the homeland per se but the idea never seems to dominate any of the stories giving the reader a very fresh perspective on diasporic narratives which have always been dominated by the theme of nostalgia. She transcends that plane, normalizing the movement abroad and pens every story without the pressing concerns of quintessential diaspora. Through these narratives, Dhingra looks at other glaring issues of modern society. The stories, therefore, touch upon the ideas of caste, gender and condition of the elderly in our society today which has become a matter of deep concern. In the eponymous story, the gaze that constantly follows the protagonist is symbolic of the elderly who wait for their children, every minute of their day and every day of their lives. When the protagonist befriends the ‘eyes’ following him, he understands the state of affair of the entire town which has been abandoned by the young seeking better opportunities in big cities and the plight of the old ‘eyes’ which are forever forlorn. He envisages a future in which he one day will become as desperate as these elderly, away from his homeland and loved ones, seeking nothing but someone to share his story with.