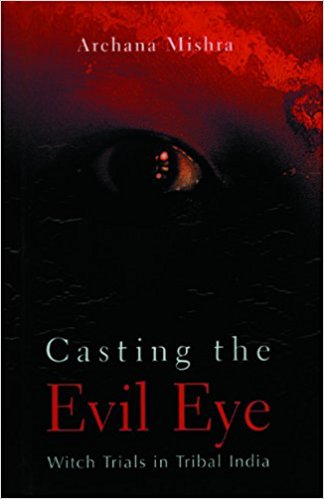 Tribal studies in India have been dominated by the romanticization of tradition visualizing the egalitarian community institutions as a pivot that propelled grassroot democracy and regulated the relationship of the tribals with their environment. Anthropologists like Haimendorf and Verrier Elwin have also suggested that the women in these societies enjoyed true freedom and equal status in tribal societies as compared with non-tribal caste societies. Archana Mishra effectively counters this myth in her book Casting the Evil Eye: Witch Trials in Tribal India. Her travels as a journalist and participant observer in the land of witches in East and West Singbhum, Jharkhand, provide insights into rural societies. It also provides ammunition for doing an effective critique of tribal traditions – traditions that have always been seen as morally superior to the values supported by modern society. In this sense Mishra’s work is an important contribution to the historiography of tribal societies. The book is elegantly produced and written in an appealing style and contains the life histories of about two hundred women termed as witches. These stories, bravely recorded by Mishra reveal how superstition guides witch trials and how the branding and hunting of witches is in fact guided by power politics within the community and tribal society itself.

The book consists of seven chapters the first part of which explores the role of the Ojha and Manjhi (or male doctors and magic men) in the Munda society and show how peoples superstitions are used by them to exploit the villagers. In a telling account of a Sokha or Ojha in East Singbhum she shows the links between small village businesses like the shop and tea stall and the Ojhas.

So while the Ojhas use their image as people who cure illness, witches were seen as people who were the cause of disease. Untimely deaths are a sure sign that a witch is at work. The people then go to the Ojhas for treatment and very often witch hunting is a result of the identification of the witch as the only cause for illness. The witches are then punished for their bad influence over ill people by being banished from their village or by having to pay a hefty price by hosting a banquet for the Ojhas. The chapter on the perceptions of witches reveals this fact and lays down the foundation for her discussion on the life of women branded as witches. The next few chapters that discuss the life stories of witches and the factors that guide witch hunting in Jharkhand. At least two trends come out starkly from her stories. The first is that abandoned women whose husbands either leave them or go out to work are often branded as witches and their sexual and economic exploitation is done on this pretext. The second trend is economic, women who get land rights and wealth after their husbands die are often termed witches and duped of their property. Disputes between the woman and her brothers or her in laws families are also solved in this manner with the so-called witches being punished for their misdeeds. In this framework the author describes shocking stories of how Chhuti Mahatani of Berbans was forced to swallow human excreta to rid herself of the evil spirit. The other stories include women who were forced to live in squalor or parade naked in the village to be cured of their witchcraft. But within this dark reality, Mishra also shows a ray of hope when she describes the way in which some victims have tried to struggle against the system by providing a home for the victims of witch hunting and spreading awareness against the practice.

The last part of the book looks at the conditions that propel and support the system of witchcraft and also discuss some state interventions. Like many officials and activists, Mishra does not cast aspersions of ignorance on the tribal society as the main cause of witch hunting. Rather her analysis is a little more sensitive when she tries to relate the superstition and the dominance of Ojha practices to the lack of public health, education and developmental infrastructure in the tribal areas. She also evaluates the laws that exist for stopping witch hunting and shows how their impact is minimal in these areas. Thus, relating witch hunting to the wider political and economic framework, Mishra provides a fascinating account of the land of the witches. Her work raises the question of whether the negative impact of neo-liberal globalisation will lead to greater exploitation of women through witch hunting or not – a question yet to be raised by scholars and activists in contemporary India.

Archana Prasad is a Fellow at the Nehru Memorial Museum and Library, New Delhi.