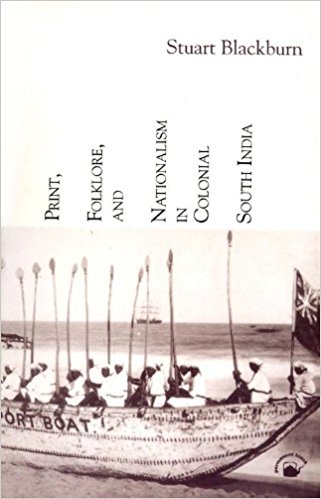 This book is a study of the history of printing in South India focussed on the role of folklore in printed books. The author approaches the matter from a folklorist’s perspective and finds the proverbial saying “that print did not produce new books, only more old books” holds true. The history of modern folklore research tells us that textualization of Indian folklore – the orally transmitted tales, songs and other verbal expressions – was started by British collectors in India in the middle of the nineteenth century. Stuart Blackburn studies textualization of (Tamil) folklore in connection with the arrival of the first printing press in Goa in a Portuguese mission. In the Introduction to his work Blackburn lays out his plan succinctly, draws the boundaries pragmatically and sets forth to write the history of print. In the next chapter about the ‘early books’ beginning from the first book by a missionary, he goes on to narrate the competitive attitude in different missions to acquire printing presses, to mutual and religious rivalries and conversions, and to the hugely popular “Guru Simpleton” (1744) by Beschi – a missionary whose work borrowed from the current oral narratives as well as contributed to them because it became very popular.