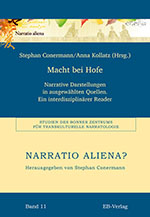 In 2018, a group of researchers based in different research groups at the University of Bonn joined together with a common interest in studying pre-modern courts as centres of social interaction and decision-making.[1] Coming from as different disciplines as European Medieval History, English Studies, History of the Middle East, in particular Mamluk Studies, Iranian Studies, Sinology, Japanese Studies, and Art History, the editors and their participating colleagues embarked in a process of building a common method allowing for transcultural and interdisciplinary comparison. The pioneering results of this interdisciplinary research group are now available to the specialist public for the first time, albeit in German for the time being.[2]

Right at the beginning, the editors introduce the reader to the practical work process of such a large-scale and interdisciplinary working group and convincingly manage to present the theoretical foundations, a common and coherent catalogue of questions and—this is the special merit of the study—a methodological tool-kit applicable to all case studies. The study includes nine fascinating case studies that take the reader to places as diverse as the court of the Roman Emperor Claudius (David Hamacher), the study of Walther Map (Dominik Büschken), or the Mughal court in the period of transition between Shah Jahan and Aurangzeb (Anna Kollatz). Christian Mauder looks at the fate of a barber who misjudged his power over a Mamluk sultan, and Jasmin Leuchtenberg considers the depiction of conflict-laden council scenes in the Rolandlslied of the priest Konrad. Marian Kasprowski analyses a German travelogue to the Chinese imperial court of the Qing dynasty in the 18th century, and Lena Ringen discusses the integration of Arabic narrative traditions into Castilian literature through the Libre del Conde Lucano. The art historian Svenja Trübenbach devotes herself to pictorial narratives in the façade paintings of the Palazzo Geremia in Trento, while the Iranist, Tilmann Trausch, analyses the narrative staging of influence and proximity to the ruler in the Tarikh-e Firuzshahi of Barani.