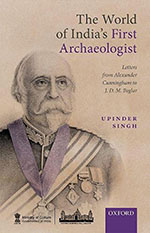 Alexander Cunningham was the first Director General of the newly established Archaeological Survey of India and had spent his entire career in the Army in India as an engineering officer participating in a number of East India Company’s campaigns in the 1830s and 1840s and also in the second Anglo-Sikh war. His wide travels enabled the development of a serious interest in ‘antiquarianism’ as it was then termed. Evidence of this is to be found in his monographs and articles on ancient coinage, architecture, early trade and pilgrim routes. Mid-nineteenth century was a time of a widespread interest among Europeans in India, especially in its ancient past with numerous debates and discoveries about scripts, inscriptions, numismatics and Buddhist and Hindu remains as equally a close scrutiny of Sanskrit, Prakrit and Pali texts. After 1857, this cluster of interests was further reinforced by the widely prevalent notion that the colonial enterprise in India was also a civilizing mission. The preservation of India’s past could thus only be undertaken by its colonial masters as the natives had neither the inclination nor indeed the capacity to do so. For the British, archaeology and the preservation of India’s past then became part of the ‘civilizing’ mandate of their empire.  Cunningham was both a product of such impulses but also one who generated and propagated them. The Archaeological Survey of India (ASI) was thus established in 1871 and Cunningham who had retired from the Army some years previously was called back from England to be its first Director General.