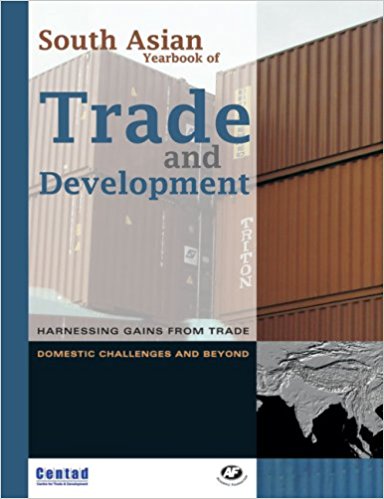 This is a compilation of articles written by various academic researchers belonging to one of two backgrounds: law and economics (in particular international trade). Credit has to be given to the editors B.S. Chimni, Saman Kelegama, Mustafizur Rahman and Linu Mathew Philip for bringing the two perspectives together into a coherent volume. The book broadly deals with two themes: First, it looks at the problems and issues related to South Asia trade, especially in its dealings with the developed world. Its second area of focus is intra-South Asia trade opportunities, which are also offered (by some authors) as panacea for ills that characterize North-South trade. While the attempt is laudable and the topics are of extreme importance in themselves, where the book suffers, perhaps, is in trying to fit these two themes together. The treatment of the second theme, at times, leaves readers asking for more, especially in light of the argument that it is one viable way to counter international imbalances in trade.

The book, after an introduction that pieces together the various themes, starts off with a basic summary of South Asia trade by Kalbe Abbas who does a fair job of presenting various indices that relate to both intra regional trade within South Asia and South Asia’s trade engagement with the rest of the world. This chapter would be useful for those who do not have easy access to trade data (even though UNCTAD does allow users free access on the web to country wise import-export data). The various import and export policies in the 1990s listed in tabular form (at least for the bigger South Asian countries) is useful. Given the table, some parts of the text are repetitive. Apart from some grammatical errors, missing words and the occasional typo (like saying South Asia is home to nearly half a billion people (Section 1.1)), the text is fairly readable and informative.

The next two chapters by Aradhana Aggarwal and Kasturi Das deal with two volatile issues in international trade: Anti-Dumping and Sanitary and Phyto-Sanitary (SPS) regulations respectively. Aggarwal discusses where South Asia stands in terms of filing of Anti-Dumping cases (as compared to the rest of the world) and discusses the efficacy of Anti-Dumping vis-á-vis countervailing duties on imports to offset subsidies in other countries. The chapter also brings out the problem of lack of finance and institutions to support Anti-Dumping cases. This is often not mentioned in discussions on South Asia (in part because a larger number of cases are filed by India which is less plagued by the financial issue). What would have enriched the discussion is a small section on what the trade theory literature says about the effect of Anti-Dumping policies on the structure of Industry in the importing economy. Das’s treatment of SPS is informative. She delves into the SPS issues (sometimes even commodity wise) for some large South Asian countries, even going into problems posed by each developed country, for example, what are the SPS issues of South Asia with regard to the US.