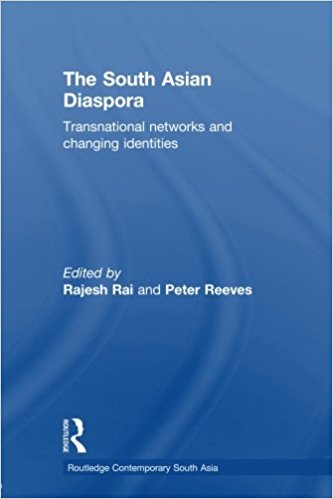 ‘Diaspora’ is an ancient word, derived from a Greek term that refers to the act of sowing or scattering seeds. Historically connected with the dispersal of the Jewish people, the term was subsequently seen to be equally relevant to the experiences of other peoples and communities such as slaves, convicts in penal settlements and indentured labourers. Again, while violence and forced dispersal may be characteristic of such diasporas, it is not necessarily a part of the experience of many others—immigrants, migrants, transnational professionals—who constitute the massive migrations of the later colonial period and have continued into the 21st century. The collective memory of a ‘homeland’, the sense of exile and loss, and the persistence of ‘homeland’ political and socio-economic identities are generally agreed to be key markers of the diasporic condition.

In the last decade, theorizations of diaspora in a range of disciplines—literature, anthropology, sociology, film studies, history, queer theory, ethnic studies—have expanded the scope of diaspora studies to encompass a wide range of movements and dislocations, sometimes disregarding considerations such as choice or privilege.

The South Asian diaspora numbers around 30 million people and is recognized as the most widely dispersed. It is also unique for its continuing expansion. The colonial diasporas of Southeast Asia, South and East Africa, the Caribbean, Mauritius and Fiji have created significant communities in these regions. The period after the Second World War has seen a huge expansion in South Asian communities in the UK, USA, Canada and Australia, as well as a more or less steady presence of over five million transient South Asian workers in the Middle East. These later migrations are inextricably linked to the growth and movement of global capital across borders, with different trajectories—financial, ideological, national, cultural—overlapping and intersecting to create new spaces and new questions of nationality and identity. The complexity of these spaces is being further compounded by the recent attempts by South Asian countries, India in particular, to draw privileged and powerful members of diasporas back into the national fold.

The editors of this volume, a collection of papers presented at a 2004 international conference on ‘Asian Diasporas’ at the National University of Singapore, seek to break down what they describe as ‘artificial boundaries’ between the ‘old’ diasporas—born out of colonial capital, and moving from the centre to the peripheries of the global economy—and the ‘new’ diasporas that are intimately connected to the economic transformations brought about by globalization. The greater sense of connectedness with the homeland enabled by technological advances might raise questions about the validity of notions such as ‘exile’ and ‘fracture’ for the new diaspora, but the papers in this book mostly highlight the common concern with identity and the conflicted relationship with the social, cultural and religious practices of the ‘homeland’.

The first section looks at transnational trade networks and their role in creating the space and establishing the context for the economic and social features of subsequent diasporas. Merchant communities of Sindh and Gujarat who traversed existing land and sea routes in the early twentieth century created networks and social spaces that were more free and fluid than the diasporic space, while creating their own networks of connection, support and solidarity. The paper by Peter Reeves suggests intriguing comparisons and divergences between these early transnational merchant-adventurers and later avatars like Lakshmi Mittal, who operate in a space that lies outside both the nation and the diaspora yet claim legitimacy in both. In contrast, Marina Carter’s paper on the social networks of Indian labourers in Mauritius uses a subaltern lens to show how, far from being passive victims of economic and legislative oppression and discrimination, indentured workers tapped into local inter-community and inter-ethnic networks as well as transnational intra-community networks to enlarge their space and establishing their social and economic claims.

The papers in the second and larger section of this volume focuses on identity. The political importance of proclaiming an identity is central to the diasporic condition—as Avtar Brah (rather disappointingly not one of the contributors to this volume) has it, ‘one cannot just be, one has to name an identity, no matter if naming renders invisible all the other identities—of gender, caste, religion, linguistic group, generation . . .’. The dialectic tension between ‘here’ and ‘there’ in the construction of the diasporic identity, and the changing nature of that identity, is the subject of many of the papers in this volume. Migrant communities are confronted by the question of what aspects of their familiar identities they should—or indeed can—preserve in their new environment. Not surprisingly, the reproduction and renegotiation of caste and religious identities is a central concern. In many instances, religion becomes a tool for survival as well as for resistance. Theresa Deva-sahayam describes how Tamil brahmins continue to follow caste rules in cooking and serving food. Brij Lal describes the ingenious ways in which the first generation girmitiyas in Fiji sought to erase caste markers for their children. While they themselves had names—Dukhiya, Budhiya, Bipatia, Jokhu, Sani-charee—that revealed their low status in the caste hierarchy, they named their children after gods and goddesses, or film stars and dropped their caste surnames. In examining the changing identities of three generations of Indo-Fijians, told through his own recollections, Brij Lal describes the way in which education in Christian or urban schools liberated the present generation from the world of their grandparents—the original girmitiyas. He recalls how, as he grew up, the world of his parents—joint families, observance of religious rituals and ceremonies, respect for elders and pundits, strict observance of dietary rules—paled and receded into the past. Yet, the uncertainties and anxieties of the girmitiya experience have not disappeared for their descendants, many of whom are now emigrating to escape the racial politics that is corroding their second homeland.

The ‘South Asian’ in the title of the book is somewhat misleading—except for a single paper on Bangladeshi migrants in Canada, the rest of the essays in this book are devoted to various aspects of the Indian diasporic experience. The paper from the Bangladeshi scholar Habibul Khondkar is a comparison of the Bangladeshi diaspora in Singapore and USA. Khondkar examines the manner in which the ‘moderate Muslim’ self-image of the Bangladeshi community in USA is being destabilized in the post- 9/11 era by individuals—women in both the encounters described in the paper—who are ‘modern’ in their daily life but revert to traditional attitudes within their own community. Khondkar cautions against the easy conclusion that diasporic Bangladeshi women are passive carriers of religiosity—indeed, he suggests that practices such as hijab and segregation of the sexes at public functions, which are not the norm in Bangladesh, may have been acquired in Gulf countries where many Bangladeshi families have lived before coming to the USA.

The absence of a female voice or women’s perspectives in most of the other essays in this book is only partially filled by Theresa Devasahayam’s paper on food customs in the Indian community in Malaysia. Focusing on the traditional role of the Indian woman as the ‘gatekeeper’ of food in the family, she argues powerfully against the analysis that, by cooking and serving food to their families, women are re-enacting their subordination—instead, the women interviewed in this paper see the acts of cooking and serving food as embodying them with the power to construct relations with and within their marital families. Thus, refusing to cook or serve becomes an act of resistance, a symbolic refusal to enter into kin bonding with the husband and marital family. Devasahayam highlights how food can go beyond the physical function of sustenance when it is manipulated to produce the symbolic man-woman relationship, especially in intercaste marriages.

Vijay Mishra’s ruminations on his lifelong engagement with the works of V.S. Naipaul is without doubt the most intriguing paper in this collection. In contrast to the multiculturalism of the new diaspora, Mishra reads Naipaul as an exemplar of the ‘old diaspora’ and its willingness to absorb and assimilate the narratives of European modernity. His paper captures perfectly the ‘familiar temporariness’ that pervades Naipaul’s work—the feeling of being in a space where issues of home, belonging and identity are perennially contested, not only for the migrant but for those ‘others’ who consider themselves secure in their own homelands.

Kalyani Menon Sen is a feminist activist, researcher and trainer.