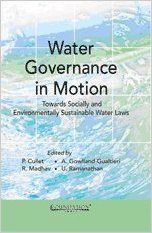 The regulatory framework around water n India grew over a long period of time and resembled a patchwork that contained laws of diverse origins, some drawn from ancient local customs and traditions and others from British common law by the colonial government. The resultant amorphous laws, principles, rules and judicial decisions governing all water in all its uses in India presented lack of clarity. Internationally; on the other hand, new concepts and practices were introduced, new policies adopted and water laws were reformed in many countries. Often, international lending institutions such as the World Bank and the Asian Development Bank strongly endorsed these reforms by including them as part of their lending instruments. Consequently, since the Indian economy opened up, the changes that were introduced included water sector reformspromoted as a comprehensive set of changes that have the potential to address the current and forthcoming water crisis.

These reforms support the integrated management of water resources and are seen as having the potential to rectify the shortcomings of earlier water sector policies. However, the reforms are also based on a relatively narrow set of principles that emphasize the need to conceive water as an economic good or a commodity. The assumption is based on the simplistic argument that if water is priced, it will result in more efficient uses of this scarce commodity, and this restricted use will then lead towards the resolution of water scarcity.