Towards An Alternative Paradigm? 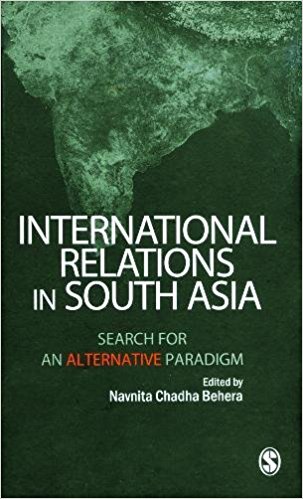 This book is a necessary reading for all policy makers and academics interested in developing International Relations as a discipline in the country. In the first chapter the editor Navnita Behera has set forth comprehensively the present position in respect of the study of International Relations in South Asian countries and has enumerated the reasons for the lack of adequate attention being paid to this area. She starts with the lack of proper teaching materials and text-books and goes on to list the absence of institution-building strategies, totally inadequate funding, absence of a well-knit national community engaged in effective international communion, absence of a publishing culture and lack of career opportunities, to explain the present state of affairs. She has also focused on problems of student training arising out of there being no undergraduate courses.

The history of evolution of Indian foreign policy under Jawaharlal Nehru and his successors and the deep divide between the foreign policy bureaucracy and academic community have been analysed to highlight the isolation of the discipline. She has devoted attention to the weakness underlying the epistemic foundations of theoretical work on the subject and her strongest indictment is about the scholastic community’s steadfast refusal to critically interrogate the character and ‘efficacy’ of the state system in the region. She is highly critical of the absence of debate in the country of the philosophical underpinnings, political strategies and goals of diverse conceptualizations of nationalism as also the teaching of India’s historical traditions and political philosophy as part of International Relations syllabus.

South Asian states do not have the kind of European nation-state that is assumed to be given and the internal vulnerabilities of the state and the insecurities of its people are often rooted in the very processes of emulating a particular kind of state, a model of the Westphalian state denoting a unified, indivisible sovereign state with centralized political authority. . . The western nation state, as pointed out earlier, had emerged within the largely homogenous societies of Europe. A mechanical application of the nation-state idea with its monolithic credo and unitary state structures on the deeply multicultural societies of South Asia was structurally flawed.

The book is a compilation of essays presented at a workshop in Goa in 2003 in which 26 scholars from across the South Asian and Southeast Asian regions participated and presented contributions on analternative paradigm from a South Asian standpoint. The editor concedes that the term ‘alternative’ itself was interpreted variously by different authors. Some sought to identify alternative sites of knowledge creation, others tried to evolve alternative set of tools for producing knowledge or employ alternative theoretical frameworks. The result is the volume does not offer an alternative paradigm. According to the editor, ‘It marks only the beginning of a stupendous journey that South Asia must undertake towards this end. This is only the first step in that direction’. One cannot disagree with that conclusion.

Apart from the editor’s insightful introduction in the volume there are thirteen other essays contributed by scholars from Taiwan, UK, Canada, Sri Lanka, Bangladesh, Nepal, India and Pakistan. Jayadeva Uyyangoda from Sri Lanka has suggested reworking the associational basis of the state so that it provides the ethnic communities a mutually agreed ground for sustainable cooperation. Mijarul Quayes has argued that instead of a sovereign superstructure for a state, South Asia’s political evolution needs to evolve through the empowerment of citizens, within inclusive communities. Ganga Thapa in his essay on Nepal has underlined the necessity for restructuring the power mechanisms because the main faultline for instability in the Nepalese system is the fissures caused by those who wished to acquire or preserve their stake in the state’s power structure.

Shibashish Chatterjee has contested the proposition that the external security dilemma of a state is exogenously determined by the anarchical structure of the international system. He argues that the paradox of a territorialized state identity not reconciled with the idea of a common cultural past is constitutive of the enmity and hostility between India and Pakistan rather than any mechanical product of an invariant anarchical structure.

Varun Sahni differing from the above view states that while structural constraints have restricted the growth of India’s military industry there was ample scope for innovative policy to overcome has been structural rigidities by altering the incentive structure for India’s neighbours as in the case of border management, nuclear deterrence and regional security policy.

Ayesha Siddiqa has advocated the concept of a nonoffensive defence, both as a better method of guaranteeing its territorial integrity as well as to allow Pakistan to concentrate on a more comprehensive mechanism of security, including social, economic and human security. Neera Chandoke argues that in the South Asian context people would be secure only when their right to physical integrity, basic needs and cultural communities are upheld and therefore the concept of security should build on that of rights instead of replacing the language of rights or seeking to subsume it.

In the view of Anand Aditya since security is a critical foundation for sustainable development, and poverty and insecurity systematically tend to reinforce each other, security becomes the first prerequisite to the attainment of any one of the three objectives—existential, process and teleological stakes. He is in favour of involving government, professionals and the community in a strategy for restructuring the role and perception of security in the region.

Mangalika de Silva narrates the story of Sriyalatha, a Tamil sex-worker brutalized by the state for mistakenly venturing into the high security zone in Colombo. She argues that this is a testimony to a hegemonic state remaining a contested site.

By examining the farmers, fish workers and other peoples’ movement in South Asia, A.K. Ramakrishnan argues that an important point of departure for International Relations theorizing in the region could be the sites of peoples’ struggles in response to global changes. Haider Nizamani deploys both discourse analysis and genealogical methodology to deconstruct the ‘givens’ of the security analyses by unravelling its contingent nature and the artificiality of statements that were presented as objective truths and by making visible not just its arbitrariness, but its complex interconnections with a multiplicity of historical processes, many of which are of recent origin. Sohail Inayatullah in his article has developed preferred and probable scenarios of South Asia, not to predict the future, but to create the possibility of another space where the present is seen as a functioning discourse instead of an essentialized reality.

The debate between area studies and disciplinary knowledge is addressed by Amitav Acharya in his essay where he has stressed the need to avoid the twin dangers of exceptionalism and parochialism while challenging the ethnocentrism of western disciplinary concepts. The study of International Relations is a function of a people’s interaction with peoples of other nations. India from Independence to the 1990s was by and large isolationist for very valid reasons and began to get integrated with the rest of the world only after the end of the Cold War. The attempts at economic integration with the rest of the world has progressed to a significant extent, political and strategic integration has still a long way to go. South Asia has also been marked by hostility—overt and not so overt—among the three major nations, India, Pakistan and Bangladesh since their very inception with roots in religious extremism. Yet neither jehadi terrorism nor the clash of civilizations thesis (and its subcontinental variant, the two nation theory) find a place in the discussions in this book. While the atrocity of a hegemonistic state against sex workers find a place in the discussion, the enormous atrocity of denying education to the girl child, employment opportunities to women and oppression of women in the name of religion and this religious cult becoming a global phenomenon has not found mention.

While there have been references to the Westphalian state model and how it is not entirely applicable to South Asia, the development of the European Union, which is today in the post-Westphalian stage of development and the similarities and dissimilarities in the development of that union with the ongoing evolution of the Indian Union could have been appropriately discussed while considering International Relations in South Asia.

Attempting to discuss International Relations in South Asia without relating the developments in the rest of the world has its limitations. Military and authoritarian regimes in South Asia have tried to model themselves on regimes which are outside the region. Partitions make it inevitable that the breakaway nations will try to define themselves in terms of their not sharing an identity with the mother country from which they seceded.

The emergence, development and consolidation of nations do not follow any organic law and each is a sui generis case. No doubt developments in successful nations have their influence and impact on others, near and far but it is futile to look for a regional paradigm in South Asia in terms of an all embracing political evolution.

Therefore, while some of the essays attempting to explore the alternative paradigm are thought-provoking (the reviewer is likely to be categorized a neo-realist) and others disappointing Behera’s introduction, even while explaining the present parlous state of International Relations in the country has left room for optimism for the future. As India globalizes increasingly in economic terms, gets recognized and attains self-recognition as a major global actor, comes to grips with major international security issues such as religious extremism, terrorism, energy security, environmental problems, pandemic challenges, international organized crime, population movements and relationship with the Diaspora. the Indian state, establishment academia and business community will come to realize the need to develop International Relations as an academic discipline on a much larger scale. Further expansion of the foreign service, intelligence services and making the armed forces more knowledge-based will all lead to development of the discipline as it did in the post-Second World War US. In that context this book is a first tentative knock on the door.