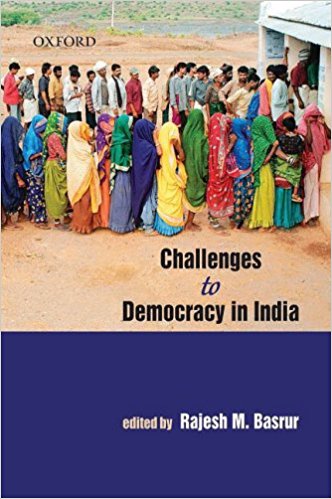 Challenges to Democracy in India is a collection of presentations made by some public intellectuals at the Nehru Centre in Mumbai between November 2005 and February 2007. Normally such an exercise could end up like the proverbial blind men describing the elephant, but surprisingly there is a certain vibrant convergence among most of the arguments: democracy has worked well in a rather formal sense but that is not enough, the culture and practices of democracy need to be deepened, and we need to move beyond formal, procedural democracy towards a more substantive arrangement that would ensure an inclusive and egalitarian social order. The most thoughtful of the essays by Neera Chandhoke ‘Deepening the Culture of Democracy in India’, comes at the very end, and if read in tandem with Zoya Hasan’s ‘Indian Democracy and Social Inequalities’ and Suhas Palshikar’s ‘The Mirror Crack’d from Side to Side . . . Are We Becoming a Majoritarian Society?’, the nature of incompleteness of Indian democracy becomes somewhat discernible.

Persistence of large-scale poverty, oppression and discrimination against lower caste and religious minorities can invite only one assessment: ‘the democratic project necessarily remains incomplete’.

We have all the trappings of a formal or political democracy, which no doubt is essential but not sufficient. Neera Chandhoke writes: ‘For democracy is much more than a system whereby citizens elect and dismiss their representatives. Democracy is about assuring freedom and equality for all citizens in their everyday life so that they can develop their capacities. Or that the project of formal democracy has to be extended into the economic, the social, the cultural, and the domestic sphere all of which are marked by inequality and unfreedom. Only a commitment to the furtherance of this particular project deepens both democracy and the democratic political culture’.