Towards A Nuanced Discourse 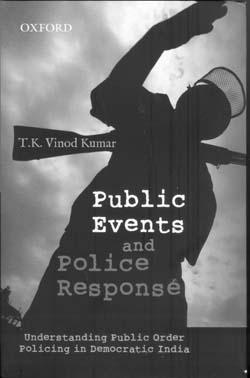 No other public institution in any po- litical system has public interface with an identifiable visibility than the police. Circumstances are almost entirely regulatory that seldom create a positive image of the institution. Obviously, in cases of maintenance of public order, the only face of the police that catches the public eye and attention is that of a strong arm of the government regulating their activity, enforcing ‘don’ts’ and being harsh on occasions in this process. Resentment that it can fuel has the capacity to snowball into protest in a democracy. Thus, police response to what T.K. Vinod Kumar characterizes as ‘public events’ (protests, events, demonstrations, et al), acquires critical significance in a democratic polity.

T.K. Vinod Kumar, a serving police officer, emphasizes the significance of policing, both generally as well as in the specific context of public events in democratic India. Kumar maps the organizational mechanism and event based response mechanism to underline two kinds of responses the police have to maintain public order. He uses case studies from Kerala, the state cadre to which he belongs, to relate assertions and expression of democratic rights to manifestations in public space both in terms of events and discourse and their impact on police response. Political meetings, mass mobilization, violent political conflicts are the features of democratic India, which on one hand reflect the nature of democracy and on the other, determine popular evaluations of police response that are dependent upon ‘use of force and sanctions’, or they ‘depend on cooperation and legitimacy.’ Kumar also rightly highlights that despite a federal structure, there is ‘a high degree of uniformity across districts, states, and the country, due to the similar organizational structure and legal framework’ in police. Therefore, organizational mechanism available to the police to address public order and steps taken too has similarity.

Kumar focuses on public protests, public disorder events and conflicts to discuss theories on public events, which according to him bring out ‘tension in the interaction between two important values of rights and freedom of individuals and need for order in society’ (p. 12). In the Indian context, he classifies public disorder into three categories—individual level disorders (drunkenness, vagrancy, etc.), organized public protests by organizations and groups and clashes on ethnic lines (caste, religion, language, etc.). The first set are daily, routine and part of regular policing. The latter two could be complex events and test both the readiness of the police in terms of temperament, techniques and technology (equipments) and their sensitivity in handling an aggressive mass of people from political and humane points of view, as accountability (social as well as institutional) invariably comes up for debate after each such event.

The author has scientifically selected and studied 2178 events that occurred over a period of one year in Kerala in terms of their impact on police response. That political events are more frequent, have greater intensity and impact police work more is a significant finding that has to be seen from the perspective of ‘difficulties’ of police work in politically surcharged atmosphere and politicization of the police that is often discussed without delving into contexts. He finds temporal variations in the occurrence of public events and stresses that it has an impact on the overall response of the police, and is manifested in the deployment of personnel and material resources, and methods of and strategies of response. Both systemic and event-based individual responses bring in ‘different degrees of interventions, ranging from not reacting to the event to monitoring the event to physically intervening in the event, use of force, registration of crime case, and conduct of arrest.’ (p. 134).

The author makes a case study of communal violence, among the most controversial events both from social and political perspectives and presents a systemic empirical examination of police response to it. In examining communal riot in a particular town and the responses of the police to the event, the preventive role emerges very strongly along with reactive control of the event once it takes place. A significant dimension that he highlights is the role of the police when community relations get strained; it is a challenging task to obviate the possibility of any resulting violence. Police deployment is only one of the measures, but the challenge is in dispute resolution. This begs the larger question whether the police and administration across the country in riot prone areas have attempted this. Gujarat 2002 that has been discussed in various ways for over a decade has not set an example in dispute resolution.

In the chapter on political violence Kumar analyses both nonviolent and violent demonstrations, bringing in significant conclusions. The police who manage and control public fury, face a difficult predicament because of the involvement of political leaders and parties. Deliberately or otherwise their mobilization and protests incite violence and at the end they dump the blame on the police. He rightly concludes that ‘(t)he nature of political discourse, frequent occurrence of public political events and violence, and absence of public opprobrium of political violence necessitates that the police take both, legal actions against public disorder, but at the same time maintain a working relationship with the political parties’ (p. 207).

The study finds police response to public events largely reactive and violent only in limited cases, but they do get highlighted in democratic discourse. The police in India, the author rightly concludes, works in a political environment and is unlikely to function independent of the situations around it characterized by the criminalization of politics and other such distortions in the political arena. Under the circumstances, when integrity, independence and impartiality of the police are questioned by political leaders, the police are portrayed as brutal, the organizational morale gets affected and the institution gets publicly undermined. The study therefore recommends more focused studies on various aspects of police functioning and a nuanced public discourse.