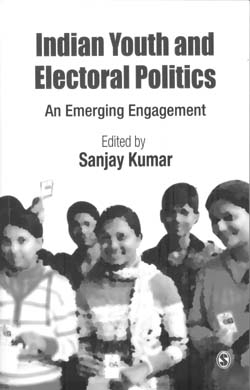 Indian Youth and Electoral Politics: An Emerging Engagement edited by Sanjay Kumar takes up critical questions that have dominated the larger political canvas since 2009. In the election year, it has come at an opportune time to build an understanding among readers and help them critically examine the idea that has been floated since the 2009 Lok Sabha election. It is since the Lok Sabha election when the conversation around the existence of youth constituency began circulating within the political circle.

Sanjay brings in different contributors to add to the diverse lens to look at youth electoral politics engagement. What is of value for readers is that all six authors have been engaged in the study which allows space for conversation richer for readers. Sanjay himself has been deeply engaged with youth and electoral politics and this engagement is clearly reflected in his writing. Vibha Attri in the article titled ‘Awareness on Political Issues’ looks at the level of political awareness among youth. Statistical evidence shows that a third of the sample is politically unaware and majority of the aware youth lie in the category of moderate awareness. Political awareness refers to how aware the young voters are about politics and other political activities which have occurred in the country in the recent past. The questions explore whether age as a factor influences political awareness. Differences in terms of gender and socio-demographic variable exist and are brought in by Vibha to highlight the role that social network plays in building political awareness by providing opportunities for political dialogues.

Kinjal Sampat and Jyoti Mishra in ‘Interest in Politics and Political Participation’ go a step further by establishing a relationship between interest and participation and make an effort to identify a pattern if available within the sample reached out to in the study. They refer to the framework introduced by Almond and Verba (1963) to examine the level of political participation with respect to the interest indicated by the youth. The level of political participation is varied as well and this is clearly articulated by the authors. The highlight of this chapter is that the authors give information on the broader background so that the statistical information can be interpreted within a specific context. They highlight the evidence that has come forth to the idea that there is an increased interest in politics among youth. It is here that the lack of homogeneity in the category of youth is brought forth and the phenomenon analysed systemically while taking into account factors such as age, education etc. They recognize that the variables taken by them to explain may not come out to be critical in the larger scenario but the reason they seem to have picked it up is because of the pattern that emerged in the collected sample.

Sanjay Kumar in the ‘Voting Pattern’ attempts to explore whether there is any political party that can claim the distinction of being a part of responding to youth issues or be called a youth party. Since the last election in 2009, the idea of youth being a critical vote bank has got the political parties to engage with this category actively. But the question remains, whether young people look up to any party as their own? Sanjay has looked over the voting data available and his analysis shows that the BJP has had a larger vote share support from upper caste, educated and urban youth but, in the recent past there has been an overall decline in support to BJP which is reflected in the youth share as well. Congress on the other hand has got relatively higher support from women, the uneducated, and voters above 34 years of age. The difference in voting patterns is also evident in the rural-urban votes.

The debate around the electoral reforms is critical for the youth electorate. This facet has been focused upon by Shreya Sardesai in ‘Issues of Electoral Reforms.’ This has gained attention because though many Election Commission reports have suggested reforms, yet these have remained largely on paper which has become a source of contention for many young people who find the existing system unpalatable. Anti-corruption activists who have got much support from young voices have been demanding reforms such as ‘right to reject’ the candidates during voting. In this chapter, some critical reforms such as ‘right to recall,’ ‘idea of compulsory voting,’ ‘right to reject,’ debarring those above 65 years of age from contesting election has been dealt with in detail. Certain examples of where some of these reforms have been introduced are included for a more meaningful engagement.

Political participation is articulated into direct and indirect and if one were to go back to the chapter on ‘Interest and Participation in Politics,’ then, one thing to be explored is that if interest is higher among youth then how many of them are willing to directly participate in politics by taking up politics as a career. Sanjay Kumar in the last chapter takes up a discussion around four aspects: ‘general attitude and perception about prevalent careers for youth,’ ‘reflection of the finding of the study with the general perceptions about career politics as a career choice among them,’ ‘youth perception’ regarding perception of the youth on issues of politics as a career and gender aspects involved in this choice.

The question of homogeneity within youth electorate is unpacked by authors and one is ultimately left with the realization that it may be more of a hype created by the media that youth vote is the emerging reality of Indian politics. The book offers a snapshot of the field but does not offer deeper explanations regarding the reality of youth and politics. While it gives a lot of statistical data some authors have remained at data dissemination.

Syeda Naghma Abidi is part of the Pravah Team, an organization that works with youth in Delhi and Jaipur and also works as a lecturer at Delhi University’s Department of Social Work, New Delhi.