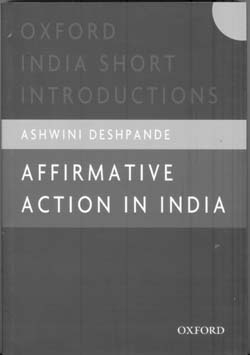 It is often stated that caste is class in India and that considerations of caste is more important than religion. It is for this reason that Ashwini Deshpande’s work deserves attention as she has researched extensively on caste and the policy of reservations in India. She considers the policy of Affirmative Action as ‘de-segregating the elite to make it more representative of society as a whole’ and in different countries the target groups and the exact sphere of intervention varies.

But the basic idea underlying Affirmative Action is to provide a mechanism to enable members of a group, who would otherwise be under-represented, relative to their share in the population, in elite positions. She points out that the elite plays an important role in the decision making apparatus and exerts a strong influence on ideas and belief systems in various spheres—government, bureaucracy, educational institutions and business and it is obvious that groups that are left out of this process resent being left out. The consequence of this resentment could be social unrest undermining the social fabric and economic health of the country. An important reason for Affirmative Action in favour of groups that are not only disadvantaged but also stigmatized and hence discriminated against is that in the absence of Affirmative Action, members of these groups are competing in a highly unequal playing field. Deshpande states that there would be no need for Affirmative Action if the market could accurately gauge the ability of everyone and reward commensurately thereby creating pure meritocracy with equal opportunity for all from birth. To the argument that Affirmative Action stigmatizes the recipients Deshpande offers two answers: first that stigma exists independent of Affirmative Action. The latter is needed to counter the discrimination that is the result of the stigma. Second, by focusing on the drop-outs from the beneficiary groups, the critics of Affirmative Action divert attention from the large number of successes. Deshpande dismisses the major concern that Affirmative Action is anti merit as it disallows individuals from privileged groups, more able and intelligent and possibly poor (upper castes or poor whites) with individuals from disadvantaged groups, less capable and possibly richer as a myth rather than reality.

Deshpande traces the evolution of preferential treatment in colonial India taking note of the views of Gandhi, Ambedkar, Phule, Naicker and others. She does not mention the Maharaja of Kolhapur who introduced reservations for the SC/STs in his state in 1910. There is extensive discussion of reservations in post-Independence India by focusing on reservations for the Scheduled Castes and Tribes, the OBCs, Women and on the implementation of reservation policy in various sectors—government, higher education, and electoral constituencies and on state level variations in quotas. She rightly points out that ‘representation of disadvantaged groups is very low in spheres where there is no reservation and where there is reservation, it is unevenly implemented’ (p.106). She quotes Marc Galantar’s pathbreaking work (pp. 149-151) and quotes his conclusion that ‘Affirmative Action has been a partial but costly success’ (p.151). She mentions the recent growth of middle class among SC/ST but does not mention the size of the dalit middle class. Nor does she refer to the Justice Sachar Committee Report to make a comparative study between the minorities and the disadvantaged castes. She points out that it would be difficult to assess OBC reservations because these are more recent and that OBCs are not stigmatized the way SC/STs are. However, not much light is thrown on the impact of liberalized economy on the policy of reservation.

Moreover, how to meet the growing demand of groups to be considered for reservation, in view of the Supreme Court cap of 50% is not examined. Nor is the demand for reservation for dalit Christians and dalit Muslims examined taking into account that caste is peculiar to the Hindus, Sikhs and Buddhists. With regard to women’s reservation the arguments of the likes of Mulayam Singh that it would only empower middle class educated women and their demand for ‘quota within quotas’ is not critically dissected. Nor is there a critical dissection of our democracy that functions under the garb of oligarchy enabling individuals belonging to well connected families to secure benefits from public office. The author also fails to take into account Brian Barry’s strident criticism of group differentiated politics as inimical to the pursuit of a programme of universal material benefit to which all must have access. Why the poor and the disadvantaged from the upper castes should be ignored is left unanswered.

An interesting offshoot of the reservation debate in the mid 1960s in the United States, at a time when the question of black deprivation became a major issue in American politics, the views of some of the black leaders were in sharp contrast to the ones articulated by the pro-reservations group in India in the mid-1990s. Jesse Jackson points to the historic economic discrimination against the blacks by way of two examples: one, a soft drink franchise which did not have a single black and second, in the automobile industry where the blacks’ share was negligible, leading to a trade deficit of five billion dollars. The net result of it is that the blacks are disproportionately large on ‘public aid or in desperation’. The solution to the problem is not an introduction of a quota but an opportunity to all with its risks or reward or loss. He also encourages the blacks to take up more challenging openings. He points out that if the blacks could be excellent in baseball and basketball they could be excellent in math also but for that to happen they ought to spend more time with their home work and not watch television. Martin Luther King Jr. wanted the furtherance of the civil rights movement by granting blacks preferential treatment not because of the abuses of the past but because ‘the back wheels of a car can never be the front wheels of a car while they are travelling at the same rate of speed’. As Keynes pointed out to the seminal importance of ideas in our life, the book would have been more useful if it had taken up the views of the opponents of reservation like Youth for Equality and analysed some of their views in the light of the past sixty plus years of reservation policy in India.