Towards a Life of Dignity 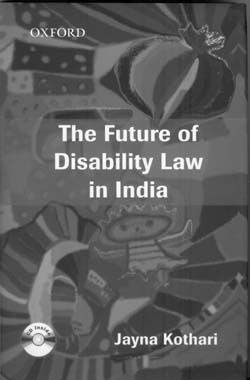 In recent times, legal engagements with disability have increased considerably following India signing and becoming signatory to the United Nations Convention of Rights of Persons with Disabilities (UNCRPD) in 2007. Intense discussions over the new draft bill 2012 addressing the concerns of persons with disabilities largely based on CRPD are going on. Disability rights movements around the country are actively critiquing the Persons with Disabilities (Equal Opportunities, Protection of Rights and Full Participation), the PWD Act 1995 and exploring the possibility of creating an inclusive legislation.

The situation today is markedly different from the early nineties when the PWD Act 1995 came to be passed by the Indian Parliament largely owing to international discourses and movements. The PWD Act was one of the first legislations clearly addressing the concerns of the disabled. It fuelled the making of disability identity and created space for wider consultations. It became the blueprint for judicial action. The book under review is one of the few attempts by a legal activist who systematically analyses the legal implications of the PWD Act and possibilities of going further, imagining what a good legislation would look like largely keeping the concepts of equality and nondiscrimination in place. The book is borne out of her own engagement with disability rights issues in the Karnataka High Court.

The fact that disability is not specifically mentioned in the Constitution except in places where employment is discussed shows that there is no clear conception of equality for the disabled before law. The author makes an effort to expand the scope of article 15 and 16 and 41 and 42 where the language of law would allow disability to be included in the category of historically and socially discriminated people. Thus, evolving from welfarist notions to the making of rights based law, a paradigm shift is noted. In the absence of clear constitutional provisions yet, the PWD Act served as a guideline in the judicial process.

Keeping the focus on the PWD Act and its achievements and failures, largely looking through the prism of legal practices in comparative contexts and cases in Indian courts, the author delineates some of the core areas of concern mainly from the legal point of view. The book makes use of a number of lawsuits and judicial decisions to make a case for transformation in disability law. The Introduction lays the ground by using examples from national and international contexts substantiating the need for an equality law which is based on the idea of non-discrimination. The invisibility, social discrimination and inequality the disabled face in almost of all spheres of life is seen as sufficient to be the basis for such a law. Thus social model informs the analytical thrust of the work.

There are nine chapters in the PWD Act that deal with state and central coordination committees, prevention, early detection education, employment, affirmative action, non-discrimination, research and man power development, institutions of persons with disability, the commissioners and chief commissioners and social security measures. This book only deals with core themes of the statute revolving around equality and non-discrimination.

By reviewing theories of equality the author explores the possibility of how equality and non-discrimination under Article 14, 15 and 16 are interpreted by Supreme Court judgments and how it can be considered as a marker for non-discrimination. Kothari also explores various constitutional provisions and theoretical approaches such as Sen’s capability approach, minority group rights approach, and equality of opportunities to examine the issue.

The problematic, however, is raised in relation to the category of disability which has not been treated as an axis of exclusion in social terms. Since the PWD Act only identifies seven types of disabilities and also emphasizes on percentage of disability in order to enable a person to avail of facilities and concessions, it has been heavily criticized. Excessive reliance on medical explanation and certification in terms of defining types and form of disability has been one of the major issues of discomfort. Many disabling medical and social conditions like heart diseases, diabetes and HIV/AIDS are left out. The author cites instances of more inclusive definitions especially from the US and UK disability laws, since these do not clearly identify ‘who the disabled are’ unlike in the Indian context. Large numbers of disabled thus are left excluded in the Indian context. The author however makes an interesting point about how Indian courts have tried to expand the definition keeping in view the PWD Act but in the US, courts have taken a more restrictive definition. The new draft bill 2012 actually talks of inclusion of 67 disabilities.

The question however is to understand the concept of disability which is based on socio-medical parameters. Much of the problem actually arises from this uncertain and fluid and highly nebulous nature of the category itself. The chapter on definition of disability does not take into account the poststructural debates on disability where the body resurfaces in an expanded understanding of the social model and how such fluidity could be addressed through legal provisions.

One of the major areas of discrimination is noted in terms of inaccessibility of education for a large number of children with disabilities. The third chapter throws light upon constitutional provisions concerning fundamental right to education and right to education under the PWD Act. The discussion is centered around educational barriers, reservation in educational institutions. Further, various High Court and Supreme Court decisions have been presented to illustrate how the judiciary plays an active role in assuring adequate implementation of the disability law and removing barriers. Interestingly most cases in Kerala, Rajasthan and Assam deal with those trying to get admission in professional higher education like medical colleges. Judgments show unevenness from taking a paternalistic view of the disabled to questioning the ability and capability of the disabled in pursuing technical education. Several high courts have upheld the requirement of 3% of seats given in Section 39 of the PWD Act for reservation in medical colleges but not so in postgraduate medical colleges. Scarcity of resources is cited as a reason. Reservation of seats is not upheld in case of private educational institutions and those that are not funded by the state. Lack of effort in developing a strategy for enforcing the right to inclusive education of children with disabilities at the primary and high school education level is further noted in the chapter. The debates on the ‘need’ for special education do not find much mention.

The author presents issues related to employment of disabled people in the public sector. The PWD Act has been used most with regard to equal opportunities and reservations in public employment and how it has addressed disability. One of the major problems is how the PWD is silent on extending the benefits to the private sector. This chapter delineates and discusses issues like identification of posts for disabled people, problems in identifying posts, special employment exchange, constitutional provision, reservation in public sector employment, acquiring disability during employment, promotion of disabled employees and disability Act’s provision of employment. Importantly, issues regarding the stereotyped assumption about capacities of the disabled and identification of posts especially the ‘menial’ or ‘lower’ for them is a cause for concern. The concept of ‘reasonable accommodation’ so commonly used in the western context is invoked here to find a strategy in expanding the scope of the debate.

The author discusses how disabled persons’ access to resources gets severely delimited by ‘environmental and institutional barriers’. It includes accessibility to transport (road, air, railway and water transport), public buildings such as schools, colleges, offices, airport and railway stations and also buildings of public use such as malls, cinema hall, restaurants and hotels. Accessibility to information technology is discussed but accessibility to health care facilities and various state schemes have not been considered. The UNCRPD and the PWD Act’s provisions on these issues and various judicial decisions have been discussed in this chapter. The PWD Act does not mention access to leisure and recreational facilities and services and which are noted for their importance in the lives of the persons with disabilities.

The Supreme Court in one of its judgments categorically held that the PWD Act would not be applicable to the private sector but the Bombay High Court judgment has led the way and now CRPD creates the ground for building such an amendment. The PWD Act’s silence on issues regarding discrimination, exploitation and abuse is hotly debated today. Possibilities of shaping of disability law keeping in view CRPD are examined by Kothari who argues for strengthening and expanding the interpretation of the PWD Act for paving the way towards a new and powerful equality law. Taking equality, non- discrimination and dignity as key markers of such a law, the discussion revolves around human rights and how it could inform Indian laws and policies. In conclusion, a suggestion is made about how to make provision for independent living possible for the disabled.

As a social scientist, I find the work interesting and informative. However, questions such as how a new law should be able to deal with diversities in the lives of the disabled have not paid attention to. For instance, how new laws could facilitate employment for those living in the rural areas and also not necessarily aspiring for public sector jobs. Besides, how do we address issue of rights of the disabled in the agricultural sector and informal work sphere? There is an absence of discussion on gender issues. How do we read inter-sectionalities of caste, gender, region, religion and ethnicity and disability and possibly work towards provisions which address these? Should the new law not respond to issues of neoliberalism and globalization the way they shape discourses in local contexts? What is the meaning of independent living in a society, where disability is embedded in families and communities and also marked by multiple hierarchies? Legal sources that have been used in the study are both its strength and weakness as the cases are few and far. This also shows the negligible access and usage of law by persons with disabilities in society who most often have limited resources and awareness. Nevertheless, the question of legal capacity is an important one that would pave the way for life with dignity for persons with disabilities. This work would be useful for those interested in disability, law and policy across academics and activists.

Nilika Mehrotra teaches at Centre for the Study of Social Systems, Jawaharlal Nehru University, New Delhi. She is the author of Disability, Gender and State Policy: Exploring Margins (2013).