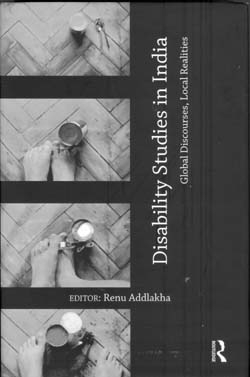 An active engagement with disability in India only began in the mid-nineties. Some of the defining works on gender and disability in India were Anita Ghai’s (Dis)Embodied Form: Issues of Disabled Women1 Asha Hans’s and Annie Patri’s Women, Disability and Identity 2 and Amita Dhanda’s Legal Order and Mental Disorder on mental health, law and gender.3 Critical writing on disability in India, whether in the field of anthropology, law or social sciences is still at a nascent stage, despite the Persons with Disabilities (Equal Opportunities, Full Participation and Protection of Rights) Act being passed in 1995 and the UN Convention on the Rights of Persons with Disabilities (UNCRPD) coming into existence in 2008. In that respect, Renu Addlakha’s edited book Disability Studies in India: Global Discourses, Local Realities is an important contribution.

Part II deals with selective abortion, family and care-giving in the context of disability. One of the essays I found most interesting in this part was by Anita Ghai and Rachana Johri titled, ‘Prenatal Diagnosis: Where do we draw the line?’ This chapter raises the complicated issues around abortion rights, autonomy and eugenics in the context of disability and is particularly relevant in India. While sex-selective abortion is prohibited in India and the Pre-Natal Diagnostic Techniques (Regulation and Prevention of Misuse) Act 1994 specifically bans the use of pre-natal diagnostic techniques for finding out the sex of the foetus, it permits such techniques to detect congenital anomalies or in situations where the woman or her spouse has a family history of mental retardation or physical deformities among other grounds. As Marsha Saxton while arguing against selective abortion on the ground of disability states so poignantly, ‘contributions of human beings cannot be judged by how we fit into the mold of normalcy, productivity or cost benefit. Human beings of difference (whether of colour, of ability, of age or of ethnic origin) have much to share about what it means to be human.’4 Ghai and Johri rightly point out that women when making a ‘choice’ to abort are not necessarily making it as free agents, but that such choices are dictated by societal pressures and negative connotations about disability. They are also not caused merely by the disabilities of those needing extra help but by lack of community services and inaccessibility and greatly exacerbated by the sexism that isolates and overworks women caregivers.5 It is in this context that we need to view selective abortion and individual choice.

Part III is a set of chapters on the experiences of adolescent girls with disabilities in different settings in India. Particularly interesting is Michele Friedner’s chapter titled ‘Identity Formation and Transnational Discourses: Thinking beyond Identity Politics’ where she examines whether the Deaf culture discourses in India (Deaf with a capital D) have led to identity formation, which goes beyond family and kinship ties, the way in which it is within the Deaf community in the global North. It is interesting that her study and interaction with Deaf women finds that it is not so in India and that the Northern discourses around Deafness had not translated into new forms of identity in India. Part IV has two short chapters on contemporary visual arts projects, which explore disability and represent the endeavours of disabled artists to express themselves creatively. These are fascinating studies, challenging our notions of photography, seeing and creating.

In the final Part, Amita Dhanda introduces the importance of the twin-track approach for dealing with gender and disability. In the background of the drafting of the UNCRPD and the inclusion of gender, she argues that not only is it important to mainstream gender in the disability rights discourse, it is also important to provide special measures and recognition for gender. This is an important strategy for feminists and disability law activists alike seeking better protection of rights for women with disabilities and this is an approach that has been implemented in the new draft Rights of Persons with Disabilities Bill 2012. Bhargavi Davar’s paper titled ‘From Mental Illness to Disability: Choices for Women Users/Survivors of Psychiatry in Self and Identity Constructions’ importantly argues how the mere change in nomenclature of mental illness to psychosocial disability may not amount to much for women with mental illness, and the challenge really is about making the UNCRPD and mental health laws relevant to women with mental illness.

While the feminist movement has tried to remove the shackles of stereotypical roles of women in marriage and motherhood, many of the essays in the book address how women with disability are yearning to take on these very roles that are denied to them because of their disability status. In this context it is important to highlight the judgment of the Supreme Court in Suchita Srivastava & Anr. vs. Chandigarh Administration6 which rejected the request of the State to carry out an abortion on Suchita who had mild mental retardation, and protected her right to be a mother and make her own reproductive choices. The Court held that her wish to bear the child must be respected and that it could not interfere with the right to personal autonomy that has been accorded to persons with mental retardation for exercising their reproductive rights.7 This judgment challenged the dominant construction and stereotypes about women with disabilities, and in order to do so, it relied upon several important interdisciplinary writings on disability and reproductive rights.

We need more writings on disability in India in all disciplines so that it contributes to the evolving discourse on disability rights and disability is considered to be a subject of mainstream thought. The disability rights movement has been striving to place the distinctive needs and experiences of persons with disabilities in the broader equality debate. We need to articulate the right to equality of disabled persons, especially women with disabilities to make their life-choices on equal terms as others, and such an articulation will not be possible without an ‘emancipatory research’ framework8 of disability studies in India. This book marks a remarkable effort in this regard.