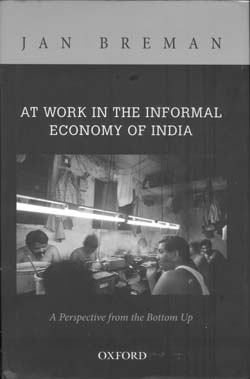 Complexities of Marginalized Labour
Avinash Kumar
AT WORK IN THE INFORMAL ECONOMY OF INDIA: A PERSPECTIVE FROM THE BOTTOM UP by Jan Breman Oxford University Press, New Delhi, 2014, 457 pp., 995
January 2014, volume 38, No 1

Jan Breman’s scholarship on the rural economy in the Indian subcontinent has remained one of the most significant contributions on the literature in the past several decades. This present attempt by Breman can be described as the summary and briefing of all his ideas emanating through his anthropological research started at the beginning of the 1960s. This becomes more important in the current times as there is a growing interest in the subcontinent to understand the complexities of the informal workforce which, although being estimated by scholars and agencies differently, covers more than 90 per cent of the Indian economy. Using examples from his field-sites in the rural landscapes of Gujarat, (where he has graduated from being a Bhai (brother) to Chacha (uncle) and now grandfather—as one of his economist friends at JNU introduces him), Breman clearly shows the trajectory of the rise of the informal sector in the country and its challenges.