Towards A Gender-just Society 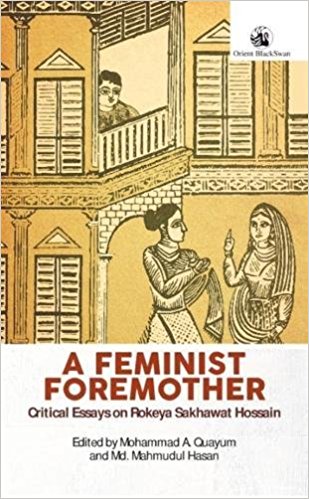 Rokeya Sakhawat Hossain was first and foremost a very courageous woman who dared to fight against all odds and achieve for women a status of dignity, self-reliance and creative agency in a time and milieu that was hostile, inhospitable and even against the equal rights of men and women. She was a Muslim feminist and social reformer who dedicated her life to the cause of educating and empowering women. Born in 1880 in a small village in Pairaband in the district of Rangpur now in Bangladesh during British colonial rule, Rokeya grew up in a Muslim family that followed the purdah, a strict set of social rules which required the seclusion of women from society. However, despite these structural constraints Rokeya first educated herself and then championed the cause of women’s education and also went on to open a girls’ school for the mission.

Rokeya’s father was a rich landowner who was keen to educate his two sons Abul Asad Ibrahim Saber and Khalil Saber. However, he did not prioritize the education of his daughters. Rokeya’s brothers were deeply inspired by their western education and upon Rokeya’s insistence began to secretly teach Rokeya and her sister Bengali and English. However, before the age of 15, Rokeya’s sister was forced into a child marriage.

This had a strong impact  on  young Rokeya’s impressionable mind and opened her eyes to the way society denied women any chance of self-exploration and saw the conjugal bond as her sole saviour. In the first essay of the volume ‘ Rokeya Sakhawat Hossain: A Biographical Essay’ Mohammad A. Quayum also significantly points out how Rokeya from an early age could critically examine and reflect upon the lives of women around her and how this quality itself later enabled her to champion so strongly the cause of women’s education. In one of her accounts the pain and agony that Rokeya went through upon witnessing her sister being compelled into a child marriage is evident; she writes, ‘Had society not been so suppressive, Karimunessa would have been a bright gem of this country, as the glow of an electric bulb is dimmed by a thick cover, so the lady described by me could not show her gifts due to the covers of purdah.’

In 1898, Rokeya married Syed Sakhawat Hossain, a civil servant by profession and one who strongly advocated the cause of women’s education. Luckily, for Rokeya, unlike the men of his times, her husband was a man who was progressive, liberal and supported her missionary zeal towards women’s education. Hossain encouraged Rokeya to continue her writings on women’s education and liberation so much so that he even set aside money for her to be able to start a school for Muslim women.  In 1905 Rokeya wrote and published Sultana’s Dream, which became one of the highest regarded literary works in Bangladesh. Rokeya lost her husband in 1909, and this was also the year that she opened the first school in Bengal for Muslim girls with only five students. Compelled by social hostility she had to close down the school in 1910 but she reopened the school in Calcutta in 1911 and the number of children rose remarkably by the year 1915. The Sakhawat Memorial Girl’s School as it was called is still very much part of the city’s landscape. In two other important essays of the book authors Mohammad A. Quayum and Sarmistha Dutta Gupta have argued how through her own life trajectory Rokeya understood education to be a key catalyst for women’s liberation and how despite the several odds that she faced she wrote and spoke extensively in both Bengali and Urdu to reach out to a maximum number of people and transform the ways in which they thought.

In 1916 Rokeya took a step ahead in her activism and founded the Muslim Women’s Association, an organization that stood for women’s education and employment.  In 1926, Rokeya presided over the Bengal Women’s Education Conference held in Calcutta, the first noted attempt to bring women together in support of women’s education rights. Rokeya continued to be deeply involved and active in various debates and conferences that concerned the rights of women until the time of her death in December, 1932. Rokeya’s creative genius will forever be remembered by the people of the subcontinent primarily in India and Bangladesh. She is one of Asia’s earliest feminist writers and thinkers who dreamt of and worked towards the achievement of women’s empowerment, education and social dignity in a context that was patriarchal, unjust and hostile towards these very values. It is in this context that Bharati Ray’s essay ‘ A Feminist Critique of Patriarchy’ and Srimati Mukherjee’s essay ‘A Not So Banal Evil: Rokeya in Confrontation with Patriarchy’ establish extensively the fact that Rokeya’s feminism was deeply entrenched in her own secluded childhood where she saw discrimination against women like her sister and herself compared to their brothers. Thus for Rokeya the context of becoming a feminist was not ever dissociated from her own cultural locale and that is why perhaps the vocabulary she used, the tactics she adopted and the approach she had appealed to people in her times as much as they do now.

We have come a long way since the time of Rokeya, but she continues to hold relevance even today because despite the many outer changes, the situation of women in the subcontinent continues to be unimpressive both in terms of the lives they lead as members of a family as well as that of the social and professional world. A Feminist Foremother is a collection of thirteen critical essays written by renowned scholars on various themes. Some of the other significant essays in the collection are ‘Contextualising Rokeya Sakhawat Hossain’s Work in South Asian Muslim Feminism’ by Md. Mahmudul Hasan, ‘A Feminist Critique of Patriarchy: Rokeya Sakhaawat Hossain’ by Bharati Ray, ‘Education Women, Not Serving the Nation: The Interface of Feminsim and Nationalism in the Works of Rokeya Sakhaawat Hossain’ by Md. Rezaul Haque and ‘Entertainer-Educators: Humour, Gender and Education in Selected Writings of Rokeya Sakhawat Hossain, Lila Majumdar and Nabananeeta Dev Sen’ by Barnita Bagchi.

The volume is of significance not only because of the range of issues related to Rokeya’s life and works that it touches upon but also because these are written in the broader context of issues and challenges facing the world in general and contemporary South Asia in particular. The volume places an early feminist thinker like Rokeya within the socio-historical context of her times and the same time it raises many contemporary questions. Another valuable and significant contribution of the volume is that it enables the reader to make sense of the extraordinary vision she had and despite social ridicule and condemnation how she relentlessly fought for a gender-just and egalitarian social world.

Perhaps the only thing that the book misses is to ask is why despite her enormous contributions and radical thoughts, Begum Sakhawat Hossain’s work is less known and scantily read unlike some of her other feminist colleagues like Savitri Bai Phule who is seen as a champion of Dalit women’s emancipation and is frequently invoked in subaltern-gender debates in the country. Another important aspect that the book fails to address is the issue of how Rokeya, despite being an ardent and devout follower of the Purdah herself, could challenge the hegemony of patriarchy and think so fearlessly for the true emancipation of the women of her community and how contemporary feminism tends to limit itself to merely women’s choice of clothes and partners and fails to liberate women from the grasp of market induced commodification, which may have in many subtle ways replaced brutal patriarchy but is equally repressive and derogatory. Perhaps an essay of the notions of pop feminism and the feminism of Rokeya would have added to the charm of this important volume. Nevertheless, A Feminist Foremother is a book that must be read and debated widely.

Ananya Pathak did her postgraduation from the Centre for Political Studies in Jawaharlal Nehru University and is presently the Feature Editor at The New Learn, a monthly magazine on education and cultural politics.