Darkness Over the Sublime 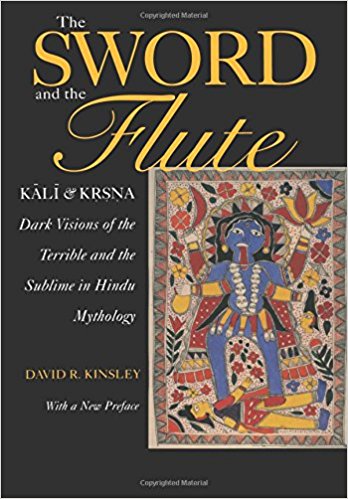 David Kinsley says in his preface that he came to Calcutta to undertake resear­ch on the Bengal Vaishnavas—‘and it was with some eagerness that I anticipa­ted seeing Krsna expressing himself in a cultic context’. Then he tells us about the tumultuous celebrations of Durga Puja he saw, finally how ‘in the rear of the truck’s cab’ he fell into the arms of the Kali image, breaking her arm, as ‘the lurching vehicle careened through the streets’ for the immersion ceremony. After this rather zippy beginning the journey starts for visions of the terrible and the sublime—‘glimpse Kali’s sword and hear Krsna’s flute’.

In the first page of his first chapter, writing about Krsna, Kinsley says: ‘His most famous and dramatic intervention has come to be known as the Bhagavad­gita, the “Song of the Lord”, in which he reveals himself as an avatara of Vishnu, an incarnation (or descent) of the supreme god, whose divine purpose is to ensure victory for the just Pandavas’, later on, he writes, ‘playing the role of Arjuna’s charioteer (A humble and sub­servient role, like his later cowherd role)’.