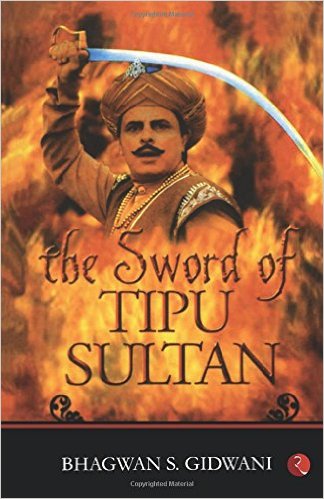 Few rulers have been so maligned and misrepresented as Tipu Sultan, the Tiger of Mysore, who has generally been pictured as an ‘intolerant bigot’ or ‘the furious fanatic’—and consigned to the category of monsters. Generations of readers have accepted this view of the contemporary Englishman, writing with a sense of moral superiority over the so­-called barbarian, who felt that liquidat­ing Tipu was as desirable as beating Boney. A few recent biographies of Tipu have endeavoured to picture Tipu as he was—minus all the distortions—and the latest in the series is Bhagwan S. Gid­wani’s The Sword of Tipu Sultan.

Gidwani feels a great need to ‘re-educate’ our students and he dedicates the book ‘to the country which lacks a historian’, ‘to Men whom History owes rehabilitation’ and to the ‘youth of India who must be told the truth’.

Tipu certainly is a man whom history owes rehabilitation and Gidwani, after thirteen years of research delving into original Indian, English, French, Portuguese, Turkish and Persian records, sets about this task, giving not just a cold-blooded factual representation of history but ‘an artistic representation of history’ which is ‘a more scientific and serious pursuit than the exact writing of history.’ A purely historical work, Gidwani felt, would prove to be an inadequate medium to recapture all that Tipu lived and died for. The result is a vivid portrayal of the· life and legend of Tipu in the popular form of a historical novel.

Tipu, as he emerges from Gidwani’s pages, is a tolerant man, an enlightened ruler popular with his subjects, and above all, a man ‘with compassion for the weak, the innocent and for the help­less—countless thousands upon thousands on whom the aliens would now unleash their remorseless war machine.’

Gidwani’s Tipu may be unacceptable to those fed ad nauseum on tales of Tipu’s cruelty. The question arises—how is there so much discrepancy between the two versions of Tipu? It is easy to ex­plain. Englishmen were prejudiced against Tipu because they regarded him as their most formidable rival and inve­terate enemy, and because he refused to become a tributary of the English Com­pany. It was necessary to keep the fear and detestation in which he was held beaten up almost to the point of hysteria to justify their actions against him. With the years since Independence lengthen­ing, it becomes easier for both sides to seek without rancour the truth about Tipu—and Gidwani’s version appears closer to what recent biographers of Tipu believe. That Tipu was no religious fanatic but favoured communal harmony, is accepted by other historians too. Tipu is pictured too as being aware of a com­mon national culture, and of being ‘the first nationalist’. If not a nationalist in the modern sense of the word, Tipu was certainly aware that his real enemies were not the Marathas or the Nizam but the English. Gidwani becomes imagina­tive, romantic and poetic in a few chapters—but that is the license for flights of fancy allowed to a writer of a historical novel. If his version of the death of General Mathews is very different from that put forward by two other recent biographers of Tipu—a version even ac­cepted by Macartney, the contemporary Governor of Madras—well, his is the more colourful.

A lighter touch is introduced at places where Gidwani describes Tipu’s attempts to modernize pearl fishery and horse breeding—but there too he makes his point about Tipu’s awareness of ‘imperi­alist designs’ of foreigners. Tipu’s speech about ‘being assassinated by the enemy within us’—is relevant today also.

Gidwani has brushed away a lot of cobwebs obscuring the picture of Tipu, though he has added a few embellish­ments of his own. The Tiger of Mysore that emerges is neither the man-eating nor the paper species, nor even a hybrid of the two; but an intensely thinking, feeling, humane human being. On the whole, a beguiling book for the general reader—but it is not pure history. One more point—one could not help wishing that the proof-reading had been done more carefully.

Soumya Ramaswamy is on the staff of Jawaharlal Nehru Memorial Fund, New Delhi.