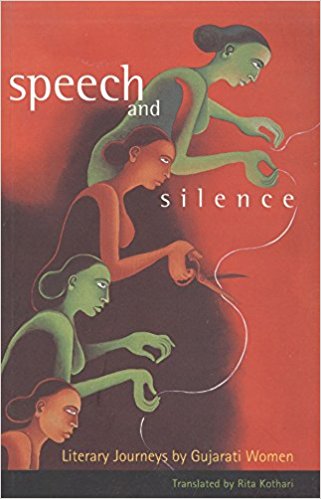 There are occasions when you feel a kind of bliss when you read a book that is able to deal with things that are dear to your heart. Here is such a publication: an anthology that collects writing by Gujarati women over a century. Rita Kothari has done an excellent job of selecting and translating texts that speak not only about the usual constraints that these women live in, but also the subtle and serious gaps of silence that speak more of the ‘truths’ about life. It takes some time to realize that silence most probably is the most articulate forms of speech – it leaves the options of interpretation open to the listener. Silences speak more than all the cacophony of words in a system where women remain under the control of men, of social norms and certainly, also of conventions. The book contains eighteen stories; beginning with ‘Entries from Vanamala’s Diary: An Account of A Tragic Decline’ by Leelavati Munshi writing in the early twentieth century, to ‘The Transience of Things’ by Vinodini Neelkanth writing towards the end of the century.

It covers a wide range of texts, of various kinds of writing trying to make sense of the reality they lived in. There is an excellent ‘Introduction’ to the book written by Rita Kothari and it would be worthwhile to start the discussion from here.

Kothari makes it clear that she wanted to translate texts that dealt with the world these women lived in: ‘This trajectory of a century of women’s voices in Gujarat is as much about bondedness as it is about emancipation. I have been interested not only in the things they say, but also in the things they don’t say. – – – This anthology registers Gujarati women’s journey from a muffled to a more candid way of being, though one which never completely loses its middle-class genteelness’. In fact, the Introduction gives an excellent reading of the women-writer’s situation in Gujarat within the larger, hegemonic network controlled by the three attributes of caste, class and gender. Kothari suggests that writing in Gujarat has been largely ‘integrationist’ with Gandhianism and conservationism playing a role in making literature stay within the bounds of a mercantile-interest bound society. It was difficult, or rather impossible for women to go against the dominant assumptions formulated by the culture they inherited and lived in, and therefore, it is all the more interesting to see how they deal with life with its manifold surprises that sometimes demand a completely different response. Kothari presents a survey of the material presented in the anthology and comments that there are two specific kinds of stories in the volume: ‘those explicitly concerned with women protagonists and those which are virtually womanless’. In both cases, the response of women to social conventions and cultural constraints manifests realms of silence that speak from the heart; they say a lot when they cannot speak in the face of oppressive measures—sexual or otherwise. The stories are very good examples of these gaps—they comment on the world by not speaking, by refusing to enter into a dialogue with the cruel conventions that bound the society.

Kothari makes a comment on the work of the ‘translator’ at the end of the Introduction, which I think is debatable. She says: ‘…any translator working from Indian languages into English cannot escape from the singularly homogenizing nature of her target language. The everyday Gujaratiness of Dhiruben’s prose or the bilingual sensibility of Mira Yagnik…; Patrawalla’s intimidating mixure of the Parsi-Gujarati with rural dialects and Shrimali’s prose replete with Dalit customs and phraseology—all this and more had to be rendered in a language that does not respond to a multiplicity of registers.’ It is a fact that in India, we are aware of the enormous plurality of languages, the manifold registers of expression and the diverse modes of cultures. We have first-hand experience of the very unique character of dialects—each signify the distinctive nature of the community. For instance, a dialect from eastern Uttar Pradesh will carry its own attributes into the text, which a dialect from eastern Maharashtra will not. On the other hand, the English we have been taught through the education system is ‘literary’; it aspires to the ‘standard’ form of expression. The colonies were supposed to learn the King’s or Queen’s English in its standard form; that of course does not mean that there are no dialects in English. Think of the English language spoken in Wales, in Ireland or in Scotland, in Boston or in Texas, and you would remember the wide variations in the registers. The English we learn is surely ‘homogenizing’ as Kothari says, but the language surely has many registers that are not available to us in the erstwhile colonies. Therefore, Kothari renders the variety of the registers of Gujarati in the ‘standard’ English form known to Indians, and in my reading, though there is a loss, ‘the gain’ certainly ‘compensates’. The translator in this text has been able to transfer into English the very subtle nuances of the Gujarati dialects. There are many occasions where she maintains expressions in the indigenous language to convey the significance. It would be worthwhile to quote a few examples:

1) When I complained about this to my maalik, he refused to listen. He said, ‘If I were to act on such trivial grounds, I would have to shut down the Natak Company. Stay if you wish and if you don’t, you are free to go’ (p. 2). 2) Arre Parameswara, why have I, of all people, landed here? If You wanted me to go through this, couldn’t You have arranged my upbringing in a less respectable family? (p. 3) 3) Most visitors replied: ‘The sutradhar of the entire city; you are boundless. We are the dust of your feet’ (p. 65). 4) Rehmanchacha recognized me immediately and said, ‘Baby, how long has it been? Were you in Vilaayat’? ‘No. You’ve been well, I hope chacha?’ The question made him pensive. There seemed little difference between chacha and his horse. He was talking to him. ‘Kambakht, you and I both refuse to die. We keep carrying on with life’s burden’ (p. 59).

You see that the translator maintains expressions in Gujarati on which the statement hinges; she also does not footnote ‘Kambakht’ or ‘Vilaayat’. I felt that these words certainly conveyed a lot, they somehow make the speaker more vivid in the translation, and they act like sources of strength in the sentence. I congratulate the translator for this decision to keep them as they are and not alter them to some English form. All Indians of course know the meanings of these terms and that is what is important.

Another major achievement of these translated texts is that the language is of a different style in each story; Kothari has been able to convey the style of the original to a large extent. Let me give specific examples to prove my point:

1) Why should I look down on him? What is wrong in belonging to the world that gave me success? What connection do I have with my former world? That world made me feel like a sinner and for no fault of mine, cast me as a fallen woman. Why should I subject myself to its laws and dictates? (p. 12).

2) It had rained continuously even on that day. Clouds heavy with water had begun to huddle together in the morning. Then the wind and the water came down in sheets, threatening to sweep entire houses away. Hit hard, the earth seemed to wince under every hammer-blow of rain. She had gone to school with her two brothers. The three of them had to come back wading through water because the school had had to close (p. 54).

3) She began to walk slowly now, swinging merrily on her way to the toilet, a lota filled with water in her hand. Once again Ambama caught up with her and nudged her gently. She took her to one side, ‘Stand aside, will you!’ Ambama had turned from a mere neighbour into a friend within a few days of Chandan’s arrival (p. 106).

These extracts feel different—they have their own distinctive styles and the English also captures that nuance in a remarkable manner. You can feel that these stories are written by different people, belonging to different times and to different social classes. As a translator, Rita Kothari certainly deserves praise for her ability to carry the tone of the story over into English.

To me, this anthology of writing by Gujarati women certainly maintains the value of the originals; they do not seek to domesticate the stories into the aesthetic universe of the English reading cultures of the West. There is a need to encourage such translations, because they do not sell ourselves for the consumption of someone who does not understand our values—however diverse they may be. I wish other translators would act in this manner and not serve literature written here to the ‘authority’ of the English-speaking world. To me this was a treat and I hope others enjoy the book also.

Mahasweta Sengupta teaches at the Central Institute of English and Foreign Languages in Hyderabad.

Explorations in a Rational Mode
November 20, 2017