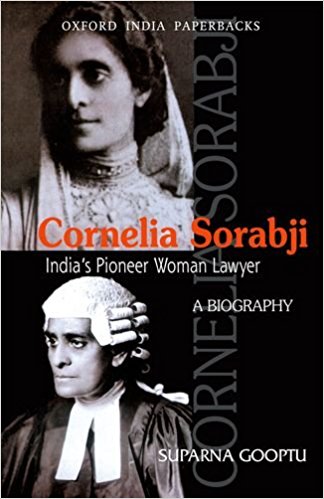 Anglophilia has long afflicted the average educated Indian Parsi. It was so in the Victorian era. It is so now. Cornelia Sorabji was no exception. Though only half a Parsi, she did not do things by halves. Anglorientation likewise has long enticed the (always) above average educated Bengali, whether wholly Calcuttan or partly Prabashi. It was so in the age of Empire. It is so now. Suparna Gooptu is no exception. She does not do things by halves either. The book under review is a happy consensus ad idem between a posthumously serendipitous but relatively unheard of lawyer and an equally fortunate academician in quest of a subject for her doctoral degree. As a genre, the biography of an unknown Indian and the autobiography of an unknown Indian in the Continent of Circe, where West meets East, have tended to be written in the same language but in different idioms.

Cornelia Sorabji personified that conjunction literally within India, as she moved from Nasik/Belgaum/Poona to Calcutta; she epitomized that meeting metaphorically in her belief that Britannia must ever rule the waves on India’s shores for India’s own good. In that process, as her story unfolds and when the curtain drops, she suffered a double whammy.

Gooptu has told a sensitive and compas-sionate tale in ‘the format of a historical biography’ (p. xxiii).