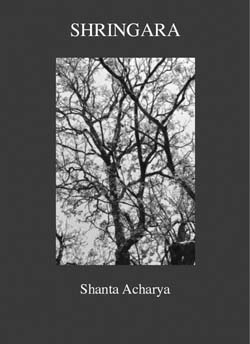 The word shringara, the title of Shanta Acharya’s fourth full-length poetry collection, has a special reverberation for me. In my childhood, reading Bengali poetry from the olden days, I would come across this mysterious word, the sheer sound of which delighted me, but whose real meaning eluded me in spite of my precocity. The only thing that was clear was that it was something special that a man did with a maiden… It is a Sanskrit word shared by modern Indian languages—I imagine it is as much a part of Shanta’s native Oriya as it is of my native Bengali—whose primary meanings include sexual desire, erotic love, and indeed sexual intercourse itself. It is also a keyword in traditional Indian literary theory, in which literature is meant to evoke in the reader states of stabilized emotion, known as rasas. Rasa itself is an interesting word, its primary meaning being ‘juice, liquid essence’. Some nine or ten fundamental rasas are enu-merated in Indian literary theory, with shringara heading the list as the adi-rasa (or the ‘primal juice’, as it were). There are other subsidiary senses in which the word shringara is used, but if I had to choose a European equivalent for it, I would settle for the Greek word eros, with the French jouissance as a runner-up.

The cover of this book, too, a deep blue inset with the photograph of a tree in blossom, with reddish flowers, encouraged me to think that I was about to read poems about love. To my surprise I found that the very first poem was a meditation in London’s Highgate Cemetery, though with yew, clematis, ivy, insects, larvae, butterflies, and birds, the ambience there had ‘more to do with the living than the departed’.