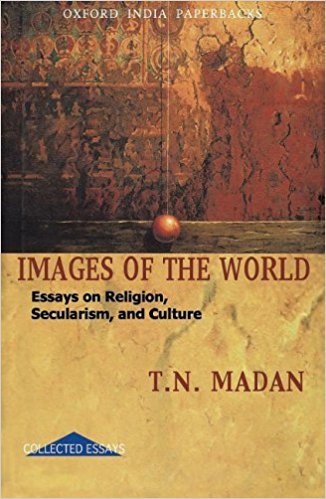 Images of the World is a useful and engaging collection of public addresses and writings produced over a period of roughly twenty years. The earliest of these goes back to 1987 and the most recent, produced in 2005. Altogether there are thirteen pieces put together for this volume which represent a continuing exploration of the significance of culture, religion, ethnicity and secularism by one of India’s foremost sociologists. As the interested reader will no doubt know, the present work succeeds a number of other comparable volumes that Madan has produced in the past : Non Renunciation (1987), Religion in India (1991), Modern Myths, Locked Minds (1997) and India’s Religions (2004). The last of these, as I recall, I had the privilege of reviewing for The Book Review in September 2005. This is a fact that I deliberately choose to mention for two reasons. In the first place, a few things that I have to say of the present work are identical with what I had to say back in 2005.

Secondly, I thought I should take this occasion to say how happy I would have been if only our author had chosen to respond to certain points of query and criticism that I had put before him at the time. In a work where he otherwise so painstakingly deals with his critics, this too might easily have been accommodated. Nonetheless, I do entertain the hope that what I had said in the past and am about to now add are not irritatingly trivial or entirely misplaced.