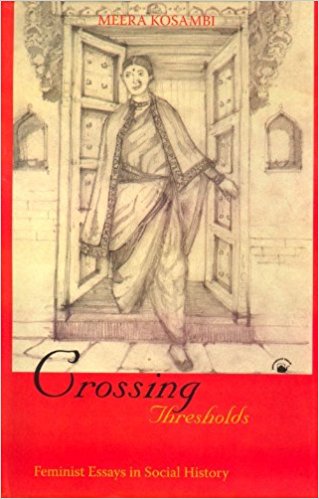 Once in a rare while, an academic reviewer gets to write about a book that is exciting, analytically sound, densely researched, thoroughly useful, wideranging, and yet focused. Meera Kosambi’s Crossing Thresholds: Feminist Essays in Social History is just such a book. It encapsulates Kosambi’s lifelong work on women’s history in colonial Maharashtra, and will stand as a definitive work on that subject in the years to come. The book consists of ten essays and an introduction. Of these, three are previously unpublished, while the rest appeared in journals or edited volumes previously. At the centre of these essays is a small number of Marathi reformist women. Kosambi, along with scholars such as Uma Chakravarti, Antoinette Burton, and Gauri Visvanathan, has contributed tremendously to our reappraisal, analysis, and appreciation of the extraordinary Pandita Ramabai. Predictably, therefore, Ramabai plays a stellar role in this collection. Along with her are Anandibai Joshee, Rakhmabai, Kashibai Kanitkar, Ramabai Ranade, Yashodabai Joshi, Laxmibai Tilak, Manorama (Ramabai’s daughter), Baya Karve, and Parvatibai Athavale.

Most of these women were born between 1858 and 1870, and were important figures in the social reform movement in late 19th century and early 20th century India. Kosambi places and fleshes out these figures and their agency in the wider context of Maharashtra history and politics. In particular, she discusses the contentious issue of social versus political reform