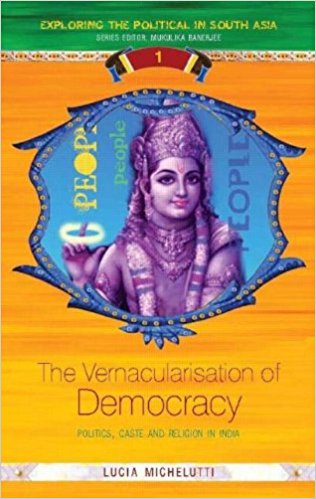 Thematizing the Contemporary
Veena Naregal
THE VERNACULARISATION OF DEMOCRACY : POLITICS, CASTE AND RELIGION IN INDIA by Michelutti Lucia NA, 2009, 256 pp., 675
December 2009, volume 33, No 12

Interested in the social and cultural practices underlying popular politics in India and elsewhere, in this volume, Michelutti investigates the engagement of the important Yadav caste-cluster with the political and electoral processes in North India. Foregrounding the contemporary transformation of Indian democracy through the emergence of the Other Backward Castes as an important constituency within electoral calculations at all levels, this study seeks to advance an anthropological understanding of Yadav political assertiveness in recent decades. Based primarily upon an ethnographic exploration of three neighbourhoods central to the Yadav presence in Mathura city, Michelutti’s fieldwork uncovers various strategies adopted by Yadav-Ahirs in Mathura and their leaders in negotiating the idiom of democratic politics to aggressively position themselves as a visible, distinctive presence within local, regional and national political arenas.

Through exploring manoeuvres such as the construction of identity narratives, political discourse and rhetoric and kinship and marriage patterns, the study offers an account of how members of the Yadav caste-cluster have evolved a self-image of being ‘pre-ordained’ politicians by ingeniously welding claims of their divine kinship with Krishna with the idiom of democratic politics.

As underlined both in the editorial foreword (xvi-xvii) to this new series on Exploring the Political in South Asia, as well as in the Introduction (pp.13-15), this study envisages itself as an innovative intervention attempting to extend the exploration of the political beyond the study of institutional practices and elite perspectives, by opening up the workings of democracy at the level of the popular and everyday practice to anthropological investigation. It builds upon her earlier engagement as a political scientist to examine the role of caste associations and political parties such as the Samajwadi Party in the mobilization of lower castes in North India in the early 1990s (p.12). The primary theoretical thrust of the author’s present efforts to immerse herself as a participant-observer of Yadav localities/politics in Mathura over a 20 month period between 1998 and 2000 (through which, we are told, she even acquired a buffalo!) is the attempt to offer an account of the ways in which politics intersects with the domain of the popular to become part of the day-to-day lives of ordinary people. Thus drawing an implicit link between the normative and implicitly Orientalizing use of western political theory and the privileging of elite perspectives hitherto within studies of Third World political trajectories, this work invokes ethnographical investigation as ‘an ideal point of departure for a radical rethinking of democratisation theories’ (p.1). In thus seeking to re-orient discussions of democracy to shed light upon the ways in which the negotiation of political processes imbue them with local meanings that do not conform to textbook definitions of democracy, the study implicitly aligns itself with the fundamental attempt within postcolonial theory to move away from prescriptive models in theorizing the contemporary within Third World politics. More explicitly, however, the study traces its attempts to argue for an anthropology of democracy to the early juncture within Indian social science in the decades after Independence when, we are told, ‘anthropologists along with political scientists and sociologists, produced a large literature on village politics (Bailey 1963), on factionalism, caste and politics (Srinivas 1962; Lynch 1969; Kothari 1970; Frankel and rao 1989) and on elections (Fox 1969) (p.2).