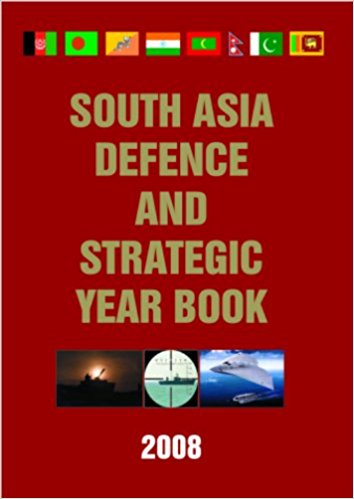 The South Asia Defence and Strategic Yearbook has been an important yearly publication highlighting the main events that have happened in the larger South Asian region. Comparing the yearbook with its contemporaries there is an Indian Defence Yearbook edited by Lt. General R.K Jasbir Singh which gives a detailed account of developments in Indian Defence with regard to procurements, research, personnel and defence industry. Among Asian publications the Asian Defence Yearbook published by the Asian Defence Journal gives a detailed account of 20 countries in Asia and pacific and discusses issues of importance in the Asian context. SP’s Military Yearbook gives a detailed perspective about strategic issues, deciphers technological advancement and gives an expert account of various military programmes and their viability along with defence modernization steps. In its last section it does give detailed military indicators of countries of East Asia and Pacific along with India.

The contents list is very exhaustive but more than one third of the book acts as a business brochure of defence companies. Manas publication has also launched its Annual Defence Yearbook which follows a similar format like that of SP yearbook but has additional sections dealing with South Asia, business, global armed forces, intelligence as well as provides details about the Indian armed forces. In comparison to yearbooks like SP Defence Yearbook and the Manas Yearbook, the yearbook under review stands out due to the well documented opinion pieces by experienced people from the armed forces, think tanks and academics. It creates a space for dialogue and discussion on important topics. Remarks by Chief of Army Staff, General Deepak Kapoor flags the issues of intrastate and interstate conflicts in South Asia and raises apprehensions about the designs of extra regional powers in the region. The yearbook provides a comprehensive overview of the developments in the region.

The Yearbook comprises fifteen chapters and annexure discusses very topical aspects of terrorism, regional security cooperation, Pakistan, Afghanistan, energy security, Indian Ocean, Military transformation, Tibet, Disaster Management and Central Asia to name few. The coverage of book is vast and this gives an all round picture of the developments, not only in the South Asian region but also encapsulates different issues which have an impact on India’s strategic interests. The first chapter by Major General Dipanker Banerjee defines south Asia as a geographical entity and gives an overview of the ancient history related to South Asia. While discussing the geostrategic context, it highlights the fact that the region has the potential for destabilization as well as development prospects. While discussing the expanse of Southern Asia, it talks about the evolution of this geographical strategic entity and includes the Eastern coast of Africa, Central Asia and Southeast Asia as its periphery. It discusses the need for power projection and balance of power in South Asia. Lieutenant General Satish Nambiar discusses regional security cooperation in South Asia and discusses the developments in 2008 in South Asian countries and highlights the problems like terrorism, migration and internal security which act as irritants between South Asian neighbours. The second part of the chapter is a visionary discourse on cooperative structures and suggests that India’s security policy should be based on three pillars of economic growth, defence capability and strategic partnerships. The subsequent chapter by Brigadier Gurmeet Kanwal highlights the Chinese notion of limited war scenarios which are protracted conflict in a certain region, territorial waters conflict, air attack and invasion by adversarial countries, limited military operation for securing a certain territory and punitive offensive measures for limited incursion. The chapter gives an all round overview of changes in Chinese military thought as well as strategic and defence plans for the new generation warfare. Professor Moonis Ahmed talks about stability in Pakistan and discusses the positive vibes between both India and Pakistan through dialogue between the heads of state as well as President Zardari’s proposal for a South Asian Pact to rule out the use of nuclear weapons in a regional conflict scenario.