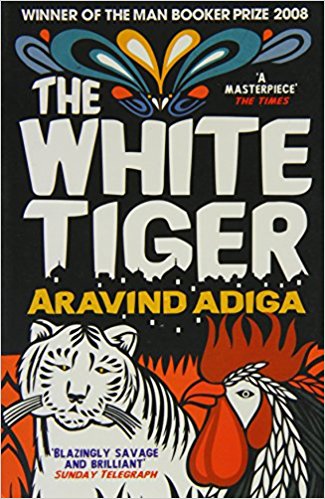 Descriptions of India are never complete; for some, she is a glass half full, while for others, a glass half empty. Adiga’s book is about the millions in India for whom the glass is always completely empty nor is there any hope that it ever will have any water!

Adiga’s first novel is a pitiless and brutal indictment of India. The story is told through the eyes of Balram Halwai and is a simple and commonplace one. Son of a rickshaw puller and born in a faceless village, he grows up as all children of the forgotten poor do—taken out of school, forced to work in tea stalls wiping tables and sodomized at will. With age, he is transferred to more ‘paying and manly’ tasks such as crushing coal and breathing in the dust particles so that death and lung disease are inevitable. He watches his father die unattended, spitting blood in a filthy government hospital and nurses the eternal dream of the poor—escape. And one day, he does.

He is plucked by good fortune from the dung heap that the majority of Indians are condemned to live and fornicate and die in. Balram Halwai, the lucky one is touched by God, or is it Gods, since there are so many that Indians remember to turn to at times of distress. He is hired as a driver to a rich and debauched landlord and his America returned son and daughter-in-law. They live in a city—a mecca for the inhabitants of the dung heap. From thereon begins the story of growing up and of discovering the ‘real’ India—dark, seamy, corrupt and evil. An India that the dung heap desperately wishes to be a part of, for it provides money, food, clothing (starched uniforms), shelter, respect and the promise of paid sexual favours with blonde foreigners. Most of all, it evokes that great human emotion: jealousy and hatred. Adiga spares no one for the rot that has eaten into the soul of the nation and her people.

Balram begins to live in a new world and with a new routine. He is now the coveted village lad who has finally ‘made it’. Everyone back home looks up to him. His rustic simplicity and his gratitude for the good fortune that has come his way makes him accept and tolerate massaging the calloused and smelly feet of his master. He thinks nothing of bathing and blow-drying the two pet Pomeranians, Puddles and Cuddles, who live a better life than most children or adults and in any case, better than anyone in his village. He looks forward to scurrying around and picking up the shuttlecock every time it falls to the ground. He wants to be seen as ‘a useful person’ to have around. And, he is a good and fast learner in this bad, bad world. The evil eye falls on him. And the story can end only the way it must: murder. Evil, foul and gruesome. Smashed skull, ripped veins, crushed chest and broken pieces of glass. The domestic help and the drivers must do the inevitable and that is precisely what Balram Halwai does: he kills his master without remorse and without guilt, with only an eye to a better life. Naturally, the master must be done in with a Johnny Walker Black Label bottle (the best there is: even empty, the bottle has value). This is not a pretty portrayal of India but then, much in India is not a pretty sight. India shining is only a small part of the story. Poverty—acute and unforgiving—leads men to do desperate things, and that is what Adiga’s book is about. The rich are petrified of becoming poor and losing the petty things they hold dear—servants and employees they can bully, politicians and bureaucrats and the police they can corrupt, the women they can buy and the laws they can break. The three pursuits they have are: money, power and sex. And the poor? Ah well, they too have needs. The same as the rich but tempered somewhat realistically on what might be do-able. But as they watch their masters and talk to other servants who have had the benefit of longer exposure, their needs and their wants increase. It is quite easy after that, for in a society built on evil and corruption, the murderer can blend seamlessly and disappear; the luckier and more intelligent ones even get accepted into a society which welcomes them as one of their own and life goes on. In a jungle, a successful tiger is not one which kills and fills his belly but rather one which can kill again and not be butchered by poachers and then shipped as body parts to China.

Adiga’s book is not extraordinary because he tells us something new. Alas no, for what Adiga does is quite simply to collate all the morbid stories of misery that our newspapers are so full of and then, he puts them together. But then he brutalizes the reader to once again read all the front page news and confronts their perennial frustration and impotence.

You and I would perhaps agree that the morning newspaper is among the worst self inflicted tortures that Indians indulge in. Leading national dailies are full of stories of last night’s brutalities. You open the paper and tell yourself that it is good fortune that you and your family are lucky to be alive to read the front page! You could well have been the one killed and a paragraph in the front page! They don’t leave you alone during the night either. TV channels, with their new found penchant, fill our homes with repetitive news that is usually unresearched and often, viciously inhuman. The tragic Aarushi story is but symptomatic of how deep the malaise is. A bereaved family is brutalized and savaged by unconscionable reporters and the police.

Is it really all that bad in India, as we are told by Adiga? If newspaper accounts and personal experiences are anything to go by, Adiga has hit a raw nerve. Do we have the courage, he seems to taunt us, to stand up and say, ‘Enough is enough! We are fed up! This is simply not our India!’

This surely is a book that will make you think. What is particularly unique about Adiga’s book is his approach. The book is essentially a letter written to Wen Jiabao, the Chinese premiere who is visiting India. Hugely readable, but simply not at one go (because of the vicious exposition of ‘real’ India), it remains a lingering memory and a call—to my mind—for action. If Adiga wins the Booker with his first novel, it would be richly deserved.

Amit Dasgupta is a serving Indian diplomat; he is currently working on a book on India.