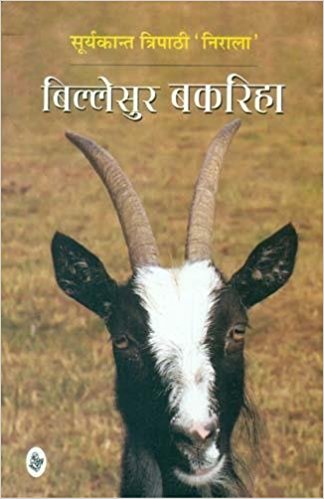 To many belonging to the ever increasing tribe of the privileged globalized Indians, who are already addicted to reading only the latest multinationally mediated, media-hyped, narratives of India in English such as, Amitav Ghosh’s Sea of Poppies and Salman Rushdie’s The Enchantress of Florence , reading Suryakant Tripathi Nirala’s so-called progressive and provocative (as if literature were not progressive in itself!) Hindi novel Billesur Bakariha and other stories in the present context may appear to an anachronistic and futile activity. The present volume enables a reader to understand how and how far Nirala’s protean creative imagination or ‘pratibha’ and his prominent nonconformist cultural politics inform not only his poetry but also his prose fiction. Nirala’s works—both poetry and prose fiction, are progressive—not because they are tethered to a progressive political ideology; but precisely because they ruthlessly foreground untruth and violence often hidden under the seemingly emancipatory claims of most of the ‘progress-oriented or progressive’ ideologies used by the power structures to manufacture the popular consent.

Moreover, Nirala unfailingly turns the oppressive, dominant discourses of caste, class and gender upside down in his poetry and prose-without resorting to patent propaganda and polemics. He may, therefore, justifiably be called a dissenting ‘chhayavadi’ (romantic) poet whose writings mark the shift from the romantic to the modernist period in the history of Hindi literature. Nirala occupies an unusual place in the chhayavadi axis (the literary movement in Hindi- 1918-1935- comprising Prasad-Pant-Nirala-Mahadevi) for aesthetically creating the disturbing ‘chhayas’ (images) of socio-political realities in such texts as ‘Vah Todati Patthar (She Breaks Stones)’, ‘Kukurmutta’, ‘Kullibhat’ ‘Tulasidas’ and ‘Ram Ki Shakti Puja’.

The comic-ironic novel, Billesur Bakariha, and the short stories (included in this volume) such as ‘Jyotirmayi’, ‘Kamala’, ‘Shrimati Gajanand Shastrini’, ‘Sakhi’, ‘Prempurna Tarang’, and ‘Artha’ offer a scathing criticism of injustice, exploitation and exclusion to which the most deprived people of Bharat are daily subjected—thanks to the dominant doxas of caste, class and gender prevailing in the colonial and postcolonial social fabric.

The very subversive semantic transmutation—(Billeshwar—the local name of Lord Shiva becomes Billesur—the name or sign of a poor brahmin shepherd who earns his livelihood not by performing rituals as a priest but by minding the goats—the bakaras) implied in the Billeshwar-Billesur episode is quite symptomatic of a silent but sure social transformation taking place in Bharat. Billesur Bakariha exposes the many hypocrisies hidden in the discourses of those who perpetrate the insidious logic of the caste-system as well those who peddle politics of the abolition of caste in India only through its perennial fortification! Nirala’s comic hero Billesur is earthy enough to parade his Gandhian quality of civil disobedience through his ticketless odyssey from his village near Kanpur in U.P. to Burdwan in West Bengal! Pundit Sattidin, another brahman character in the novel, is appointed the treasurer of the Maharaja of Burdwan—not because of his skills in accountancy, but because of his illimitable stupidity! Billesur works as a menial servant to look after the three cows in Sattidin’s household and as a temporary postman in the village. His tasks include: ‘To pick the cow-dung, clean the ground, sprinkle ash on urine-saturated soil, make the dung-cakes, bathe the cows and a lot of other things … without ignoring his duties as a postman’ (p. 24). In order to earn his good money needed for a good life, Billesur braves the scorching sun during the oppressive summer and stoically endures his daily humiliation.

Nirala takes a dig at the ideology of ‘Bolshevik progressivism’ by making Billesur a progressive worker without even having any acquaintance with ‘Bolshevism’ (p. 20). Nirala does not romanticize rural life and its obvious flaws. For example, the episode of Billesur turning spiritual and asking Pundit Sattidin for ‘guru-mantra’ during their visit to the Jagannath temple at Puri foregrounds the credulity and ignorance of the millions of Indians because of which they are duped even today by the false spiritual gurus. But Sattidin’s wife was denied gurumantra because of her menstrual uncleanliness by a priest!! It is, however, important to remember that Billesur who almost performs the duties of a shudra while working as a servant at Burdwan comes back to his village after earning some good money and invests it in business—the rearing of goats and farming. In accordance with the varna system, he, a brahmin by his birth-mark (his jati), not by virtue of his actions, becomes subsequently a shudra and a vaishya through his actions and ‘swabhav’ (character)—a kind of social mobility based on the occupational division of labour as was envisioned in the early Vedic period. Through the comic story of Billesur, Nirala satirizes the inhumane division of society into fixed castes by rupturing the caste hierarchies. Nirala even goes to the extent of making Billesur an iconoclast, when he physically attacks the idol of Hanuman who failed to protect his Dinanath, the sturdy he-goat (p. 46): ‘You are hailed as the protector of the poor, and that’s why I used to come to you and ask to protect my goats and children. Could you do so? … Billesur hit the idol of Mahavirji with the wooden stick.’

Through the character of Jyoti, the young widow in the story ‘Jyotirmayi’, Nirala castigates the exploitation of women through the patriarchal ideologies inscribed in the shastras: ‘You have enslaved us through your shastras which are loaded against us’ (p. 79). The story fulminates against the dowry system through which the destiny of a girl is fixed . In yet another story, ‘Kamla’, Nirala describes the situation of a young girl, Kamala, who was molested by her Muslim abductors in a communal riot. Her husband, Pandit Ramashanker Vajpeyi rejects her because of her being ‘polluted’. Nirala a la Manto gives a vivid and telling description of the impact of a communal riot on the people:

At this time, the foundation of the communal riot was laid in Kanpur. It started off one day—many houses from both sides were plundered and pillaged. Thousands of people were slaughtered. Those Hindus who were trapped in the Muslim localities, lost their homes, (were) killed and their women were abducted. The Hindus also followed suit. Since they (Hindus) could not convert the Muslim women, they killed them (p. 98).

Ironically enough, it is Kamala, the ‘polluted’ and rejected woman who saves and shelters her former husband’s sister during the Kanpur riot and marries her brother, Rajkishore to her.

Similarly, Nirala makes fun of the polygamous brahmin Pandit Gajanand Shastri who ‘marries four times in order to protect his dharma’ (p.101). And goes on to say self-consciously that ‘I had to write this story to protect my dharma’ (p.101). Nirala deconstructs the craving for youth that is rampant everywhere. Hence, the success of the beauty and youth ensuring industry worldwide. Nirala humorously gives a list of the followers of erotica that includes ‘Hindus, Muslims, Sikhs, Parsis, Jains, Bauddhas, Christians, … advaitins, vishishtadvaitins, dvaitins, dvaitadvaitins, shuddhatvaidins, imperialists, terrorists, socialists, qazis, sufis and chhayavadis… in other words, all the good souls (dharmatmas) of the world love youth’ (p. 102). Suparna, as a newly awakened woman, reads literature, criticism and participates in the Gandhian satyagrah. Nirala self-consciously satirizes the writers and critics of different schools through Suparna’s statement—‘Chhayavad has done more harm to our country than colonialism’ ( p. 114)—this statement wins her many progressive patrons who project her as a major writer and also help her win the assembly election.

Nirala uses metafictional strategies in the story ‘Artha’ which contains a story within a story. ‘Artha’ savages the Hindu orthodoxy which sometimes even taints the literary world through the example of an eminent Hindi novelist, Ramkumar whose belief is that Bhim, the Mahabharata hero, is needed today to weed out the Mlecchas (read Muslims and Christians). Driven to despair after his father’s death, he becomes a liberal but credulous Hindu who believes that by chanting Bharat’s name five thousand times, he can overcome his financial difficulties. Ignored by Lord Ram and Bharat, he angrily sends his letter to Ram then resident at Chitrakoot but to no avail. In order to solemnize the first death anniversary of his late father, he has to sell his wife’s jewels. In search of ‘artha’ (money), Ramkumar, now rendered penniless, eventually reaches Chitrakoot where in the crucible of Bhakti and renunciation, Ramkumar realizes the meaning (artha) of life—atmajnana or self-knowledge: ‘God is the meaning(artha). He resides as the subtle artha(meaning) in the person He bestows with His grace. And this is how He produces the sthula or gross meanings in the world’ (p. 144).

Suffused with ‘hasya rasa’ (the comic) and sometimes with savage Swiftian ‘vakrokti’ (irony), Billesur Bakariha may be read as an ‘uttarkatha’ or counternarrative of the land Bharat which was colonized by both the external and the internal enemies of self-rule or swaraj and our enslavement by the external power was a sure sign of our surrender to the enemy within, as Gandhi suggested. Gandhi, perhaps, knew best as to why some writers/poets are hailed as ‘great’ or ‘mahaprana’ (one with a great soul as Nirala was called)): ‘Poets can never be confined even in cages of their own construction. Poets write for eternity. The words are charged with meaning, which they have no conception when they utter or write them’ (Harijan, February 2, 1934). Nirala , indeed, experimented with poetic truth in Billesur Bakariha in order to remind us, the book’s present day readers, that even after the withdrawal of the colonial rule and after political freedom, issues of poverty, caste, corruption, communal violence, oppression of women and weaker sections of society continue to plague our social and cultural life.