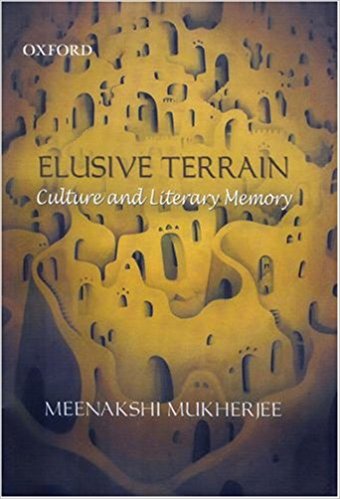 This volume comprises essays that Meenakshi Mukherjee, one of the most respected literary critics of our time, wrote for special occasions, some of them lectures delivered at different places. What holds them together is a sustained reflection on issues of culture and society as expressed in the literature of some of the languages of this country. One may say at once that it has this grace –it does not assume the superiority of Bengali ( I mean Bangla, a word I am not used to using, it trips awkwardly off my tongue) over every other literature that this country can offer. That is rare in a Bengali writer. Here is one who can say ‘the superiority of the Bangla novel –real or imaginary –is a thing of the past’ (p.64). She knows Hindi and reads it literature; she keeps up with Malayalam, Marathi and Kannada at least (I sense no serious engagement with Tamil). The book has two sections, the first titled ‘The locality of culture’ and the second ‘Uses of the past’.

The opening essay of the first section deals, not unnaturally, with English: the initial downplaying of its value in a postcolonial glorification of the mother tongue; its return center stage with fat advances to talented writers from publishers abroad; the uneven distribution of its gifts across class and caste, and most important, the vociferous demand for English among Dalits today. Add to that the fact that literature in a particular Indian language is available to those who do not speak it only in English, and there you have it—English is as important and inescapable for the ‘dreaming’ litterateur/ academic as for the globalising aspirants in the corporate sector.

Being unqualified to comment on the essay on Satyajit Ray’s adaptation of stories by Tagore and Premchand, I pass on to the next, ‘Internal Diaspora’. Communities migrating within India from one linguistic zone are the subject of an interesting essay that discusses two novels about the Marwari community, one in Hindi, Kalikath: Via Byapss by Alka Saraogi, and the other in Bengali, Moom, by Bani Basu. This is an interesting unexplored area, but the essay, while it touches on the cultural implications (p54), expends more energy on the stories themselves.

‘Hindi to Bangla’ deals with the author’s own experience of the complexities inherent in the translation process, where one word may have one set of connotations in one language and a different set of connotations in another. The difficulty of carrying across the exact flavour from one language to another has been so widely discussed that I wonder sometimes if the case is not overstated, whether the element of joyful play for the translator is not more prominent than the ‘subtle trap’ that Mukherjee mentions(p 69). She cites the example of the Sanskrit-derived word Shesh which means ‘last’ or antim in Bangla and remaining or baaki in Hindi. Are these really entirely separate meanings? Is not that which remains also, in some sense, the last? The ambiguity she brings up later (p70) is part of that element of play so dear to the translator– a game rather than a trap.

‘The House and the Road: Two Modes of Nostalgia’ offers a detailed comparison of two novels, V. S Naipaul’s A House for Mr Biswas and Bibhutibhusan Bannerjee’s Pather Panchali. The similarities between two novels which were not, could not have been, influenced by one another, are indeed striking; here is inter-textuality where there was no inter-anything. The parallel details are startling and the mention of the same poem Bingen on the Rhine in both texts goes some way towards establishing her insight about the ‘fixed pattern of colonial education and its sameness across the globe’. But how does one explain the facts that the fathers of both protagonists are aspiring writers, that there are similar drowning incidents in both novels, that in both cases the child is alive, that siblings play at building houses and so on. This is interesting detective work; when one reads a text that recalls another, one may well look for, and find, other parallels. The interesting unanswerable question that is not raised is this: are there certain modes of nostalgia or certain situations that release similar sets of images in the brain? Alternatively, and more absurdly, are ‘Indian’ childhoods of a particular time more or less the same, marked by dust, roads and ponds, siblings, dreaming fathers?

‘Mapping an Elusive Terrain’ dwells on current debates in the Indian literary landscape, passing from the alienation so pervasive in the 60s to gender and Dalit issues today. This useful essay raises the question of how to describe writing by Dalits of the creamy layer, and underscores the powerful autobiographies of the earlier generation. Even more interesting is the absence of literature by Dalits in Bangla, for which lacuna Mukherhjee offers persuasive explanations.

The second section takes a look at figures from the past, both known and obscure, who shed new light on our understanding of our colonial history. The essay ‘Women an Christianity’ examines the effects of missionary activity by, and on, women. The life of an American missionary, Rachel Johnson, told through her letters written to her family in America when the Civil War was raging there, makes one wonder about that transplantation (unconnected with the Empire of the English missionaries), from Pennsylvania to Uttar Pradesh. Mukherjee tells us she was determined to be cheerful, soaking in everything, full of appreciation. What does evangelizing zeal do to the missionary, or was it simply a matter of temperament? The autobiographical I follow After by Lakshmibai Tilak and Saguna by Krupa Sathianadhan, show what a husband’s conversion can do to the wife. What, one wonders, could they make of the doctrine of the Atonement; how did they make the history of the Israelites their own? They were given no background, neither intellectual nor spiritual, their families cast them off, and they were left anchorless.

The essay about Agnes Smedley’s love for India, which she never visited, and an Indian which came to an end, is something new, but the two that follow, one on Romesh Chunder Dutt and the other on James Tod, are far more fascinating. Dutt is an extraordinary figure. I remember buying books long ago for my children and finding translations of the Ramayana and Mahabharata in perfectly rhymed octosyllabic couplets! The author was Romesh Chunder Dutt, surely the same one. Mukherjee makes us see very vividly the way in which Dutt held in his consciousness both the sense of a unified nation, and a sense of regional differences. She lets us see the remarkable genius he was, again holding two notions of women, fiercely combative veerangana and gloriously submissive sati. The essay on James Tod’s Annals and Antiquities gives us Rajasthan and the role it played in the Bengali imagination. The history of the Rajputs were vital to the reconstruction of a new nation; loyal valorous males of Tod’s version served as a source of resistance that could be imagined by nationalists and made real.

The volume closes with two essays, ‘Narrating a Nation’, and ‘Whose Center, Which Periphery?’ The first is an extremely lucid reflection on the building of the idea of the nation. Tagore’s Gora comes in inevitably as an example. I was disappointed to find that his Irish origin, discovered at last, is not more central to the discussion. It seems to me that notions of fixity and rootedness are eroded if an ardent, caste-conscious nationalistic ‘Indian’ like Gora turns out to be Irish. What, at that point, is the text saying about narrating the nation ? I note that she touches on this in the last essay on centre and periphery (p189), but only to remark disapprovingly that five essays written in English on Gora foreground his hybridity, that is his Irish/Hindu/Brahmin identity, and concludes that writing in English and awareness of a specific target audience subtly modifies the critic’s perspective (p188). I can only say that the discovery of Gora’s foreign birth came to me not only as a shock but as a sign of the constructedness of loyalty to the country of one’s birth, the shaky nature of one’s sense of oneself.

This lucidly written study, refreshingly free of the ubiquitous language of theory, has much to offer the student of culture. Unlike her earlier path-breaking works, it does not open up an entirely new vision of our literature and culture, but it makes us re-think our inheritance.

Suguna Ramanathan taught English at St Xavier’s College, Ahmedabad for many years.. She has written critical studies of Iris Murdoch and C.P. Snow, books on Dalits in Gujarat, and a novel. She has also translated (in collaboration) modern Gujarati poetry into English.