The Heart of Chipko 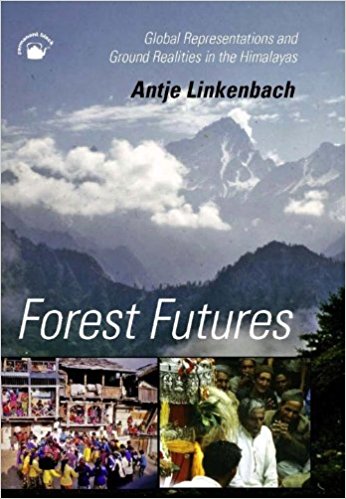 Prest Futures presents a thought-provoking ethnography of village life in Rawain (western Garhwal), a region that originated, and was affected and influenced by the Chipko movement. Given the international attention the region• has received, and the multiple interpretations that observers have given for the origins and nature of Chipko, how do local people perceive the forest, forest struggles and rights, development? What impact does all this have on their everyday relations to forests? Linkenbach’s study addresses these questions in the context of a region that lies on the margins of what is considered the centre of the Chipko movement. The book begins as most anthropological books today do with questions of methodology, particularly emphasizing the insider! outsider dilemma and how this was overcome. Uis is followed by the mandatory socio¬historical sketch of Uttarakhand, with special reference to Garhwal. The third chapter describes the history of struggles against commercial forest exploitation in this region.

The narrative structure of this chapter emphasizes the competing discourses surrounding Chipko. The ‘many Chipkos’ that the author describes provides the foundation for the argument made in the book about the ground realities that exist in the plural. The author identifies several significant distinctions between dominant discourses and various narratives of local activists and villagers (p. 63): (a) local narratives focus on parochial pictures rather than present Chipko as a coherent movement that joined people and places in Garhwal and Kumaon; (b) they accentuate the distinctiveness• of targets. The leading narrative (shared and propagated by Sunderlal Bahuguna) constructs ‘Chipko as an uninterrupted movement, with different goals in different stages, with the emphasis on ecology superseding the focus on economy. Local narratives perceive and approach the forest issue in its entirety and usually reject any attempt to isolate and pursue the ‘eco¬nomic’ and ‘ecological’ aims as mutually exclusive or oppositional; (c) local discourses reveal a situation of competition and rivalry between participants in different localities who follow divergent ideas. The inclusion of local voices that support the leading narrative of Sunderlal Bahuguna, if any, would have added balance to this picture.

These arguments are supported further by the discussion on two major divergent activist perspectives in the fifth chapter. The fourth chapter in between is a very basic summary of two of the many narratives on• ecology and development at the global/national-level and does not add much here. Specific local commentaries reflecting on these narratives drawn from fieldwork and scattered in other chapters of this book would have enriched this chapter and increased its relevance. The fifth chapter (‘Discourses on forest rights and forest use in Uttarakhand’) that analyses the differences in the perspectives of two widely acknowledged leaders of Chipko, Sunderlal Bahuguna and Chandi Prasad Bhatt, provides the discursive context in which the village ethnography in the next chapter is placed. The chapter also includes discourses of villagers in Lata and Raini, the home of Gaura Devi, a central and less recognized Chipko leader. While all three discourses take off from Chipko, their interpretations of the lessons of Chipko diverge. These differences in perspectives should be f:;tirly familiar to Indian readers and followers of this region since they have been aired in both academic and popular writings regarding Chipko but also in the context of several subsequent struggles over issues such as the Nanda Devi Biosphere, Tehri dam, and state formation in this region.

The interesting core of this ethnography lies in a chapter titled ‘The interconnections of forest and village life’. In the best traditions of anthropology, the chapter details the everyday life of work and leisure, sacred and profane, history from above and below, discourses and practices. The rhythm of the annual agricultural cycle, and the movement of work, leisure and faith around this is eloquently described. The reconstruction of local narratives on history, politics and territory, counter-posing varied narratives, is beautifully done. It exemplifies the author’s earlier statement that ‘organizing the past is meaningful in relation to the p’resent and operates as an important element in the process of identity formation’ (pp. 230-31). This chapter easily qualifies as the highlight of the book, and a good example of how narratives can be analytically examined. The point the author makes about Chipko on the disparities and interrelations between global representations of a local movement and ground realities is an important one that bears reiteration. ‘Public acknowledgement of the Chipko movement had repercussions in its original locality …. Villagers place themselves proudly in the tradition of Chipko, communicating Chipko messages, or explicitly take an oppositional stance, or try to ignore it. However all have to attend to the ideas and visions connected with Chipko’ (p. 51). However, Chipko as any student of the Himalayan region or social movements will recognize (as Linkenbach also acknowledges), is one of the most researched and written about movements in the entire region. The point about the differences between and interpenetration of local and global representations of the movement, and the adverse, unexpected and/or unsolicited impact of global representations on local life in the region, as well as the differences of opinion within the region has now also been written about by several authors. In this context, the book’s revelations are neither surprising nor new but it is well narrated. The author sets out to investigate ‘how different individuals and groups in Uttarakhand represent the Chipko andolan, how they project their own future, and the role of nature (natural resources, the forest) in local discourse and practices’ (p. 8). Perhaps it would be appropriate to add at a particular point in time, since the temporal element seems particularly influential in this work and region. As the discussion on discourses of villagers in Lata and Raina shows, even their discourses about Chipko, its leaders, or the forest, is something that has transformed over time, and given the rapid broader transformations in this region, continues to change since the time of this study. Much water has flown in the rivers of this region since Chipko. Apart from the. rise and• fall of the Chipko popularity, the building of the dam at Tehri and the politics of the struggles against displacement and the political struggles for statehood have left an imprint on the livelihood and discourses of this region. All of these have had significant influences on the discourses on forest, environment, rights, use, NGOs, activists, leadership, and imagined futures. It is surprising that a discourse on or influenced by Chipko is distilled here rela¬ively distinct from these multiple and interconnected influences. This book however redeems itself in two fays: it provides a well written collection of alternative local and non-local narratives on Chipko useful for any introduction to the issue and, an engaging ethnography detailing everyday practice and narratives to highlight the interconnections between village economy, ecology, and cultural life. It reiterates a critical Dint that issues of forest control and sustainable forest use are inextricably linked to concerns about social and economic development, and preferred futures of local residents. Sudha Vasan is Reader in the Department of Sociology, University of Delhi, Delhi.