Moving Tale of Love and Betrayal 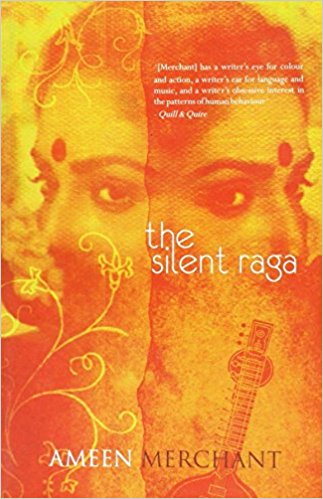 Ameen Merchant’s debut novel gently tugs at the reader’s heartstrings, stirring one’s compassion for the two sisters torn apart by varying compulsions that engulf their life in a middle class agraharam (Brahmins’ colony) in a provincial town in Tamil Nadu. The story is a simple one (almost typical of many 1970s Tamil novels) that charts the path of the two daughters of Venkatakrishnan, a bank official, in a nondescript town close to Madras. The elder daughter, Janaki, is taken off the school when she is hardly 12 following her mother’s death in a bus accident and is forced to take over the household chores by her father – a typical Tamil Brahmin male who wants his three meals at the ordained time and shies away from domestic responsibilities, a strict disciplinarian towards his daughters and a thorough hypocrite in his personal, moral conduct. Janaki excels in playing the veena and her mastery over it ultimately helps her to carve a life of her own away from the restrictive, confining environs of the agraharam and the stifling patriarchal, dowry-ridden marriage market patronized by her father and aunt.

The anguish and trauma borne by her younger sister Mallika following Janaki’s elopement forms the core of the novel. The two sisters meet and reconcile after a decade of separation and the novel beautifully graphs their bond, the fissures in the bond and the sustained common love for their mother and the years of growing up which help in healing the rupture that seemed an eternal one.

The elopement is a classic time-tested and a successful strategy in Tamil fiction, particularly congenial to an ethos steeped in an obsessive clamour for purity, chastity and caste exclusivity. It is also a glaringly melodramatic and sensational strategy but what is Tamil fiction of the 70s and 80s if not a successful combo of melodrama and a normalizing of the fantastic?

Ameen Merchant walks a tightrope (and to be fair, does it with flair) when he borrows the Tamil fiction format of the 1970s and 80s (the focused attention on Brahmin community – its language, its culture, its claustrophobic domesticity, its poverty, its pathos in its inability to marry off its young, talented but school- dropout daughters on account of ‘unreasonable’ dowry demands and a melodramatic subversion of the system by a scandalous elopement of the ‘good’ daughter with a ‘good match but bad caste’ boy) but chooses to focus less on the act of elopement and more on its impact on the younger sister and father. Of course, the father is fiercely scandalized (this despite his affair with his dead wife’s younger, widowed sister. Yeah, you have another sensational sub-plot) and loses his sanity and is housed in an asylum (we might as well get it out all at once – melodrama a, b, c …well, well, wait a while for d).

Mallika’s utter dependence on Janaki before her sister’s elopement and her later anger at the ‘betrayal’, her own entrapment in a gossip riddled media glare, the emotional and financial drain in nursing her father and her vulnerable collapsing into Janaki’s arms on being addressed ‘Thangame’ as in good old days is a moving, realistic ennobling portrait. Merchant’s sensitive treatment of a hackneyed, received tradition elevates the novel from the inter-textual orientation with the pulp and the populist and renders it a tender, credible, enormously moving human document.

The bonding between the sisters, the mothering of Mallika by Janaki – protecting the younger sibling from the knowledge of their father’s sexual indiscretions, guarding her from the viles of their ambitious aunt, initiating her into the rites and riddles of puberty – are some of the memorable sections in the novel. Janaki’s bonding with her friends, Kamala and Revathy, provides a context to her later decision to walk out of her home and thereby escape the rigors of an exacting domesticity and humiliating rounds of bride seeing episodes. Kamala’s marriage gets stalled at the mandap, a few minutes before the muhartam as her prospective father-in-law chooses to take poison and thereby, prevent his son from tying the ‘taali’ as the promised dowry had not been credited to his account. This twist (melodrama (e)?) leads to Kamala’s suicide and leaves Janaki shattered as well as alarmed concerning her own future. Even while resorting to sensationalism and high drama, Merchant retains his control over character representation and thereby manages a simultaneous use and subversion of familiar tropes. A sense of tragic waste grips the reader at Kamala’s death by hanging. A talented violinist, cheerful by temperament and starry eyed about marriage, Kamala by her death helps focus on poverty and social stasis amongst the Brahmin community.

Anguished by her friend’s death, cornered and controlled by her father and aunt, Janaki chooses to run away to Bombay and gets married to a Bollywood superstar who happened to be the chief guest at a contest where Janaki won a prize for her veena recital. This superstar also happens to be (hold your breath, for I have lost mine in keeping count of melodramatic twists) a married, Muslim man (and his wife is paralysed from the neck following a fall in the hills during their honeymoon)!

Bizzare, incredible twists? Never mind. What matters (and this is Merchant’s true triumph) is how the author metamorphoses the given, rather acclematised material into a work of art and compelling reading. Merchant’s two-pronged strategy of unstinted focus on the web of personal conflicts and emotional base of the characters with an undivided attention on the two sisters’ endearing bond is intertwined with a musical structure that is at once integral to Janaki’s persona and a mode of artistic distancing from the received format of melodrama and fantasia.

The novel is structured like a concert with different sections labeled Varanam, Alapana, Krithi, Ragam Thanam Pallavi, Padam, Tillana and finally a Mangalam. Janaki’s intense passion for the veena, her long, dedicated rehearsals, her close friendship with the violin playing Kamala and vocalist Revathy is integral to the plot and the musical structure captures the various phases, nuances and milestones of the protagonist’s life very well. It also ably juxtaposes Janaki’s father’s resentment of her music teacher, her music classes and her latent ambition to perform on stage with his innate paranoia for control over his daughter’s sexuality. He seeks to imprison Janaki in the kitchen but the girl explores rhythm even in her daily chores. Merchant’s use of Carnatic music texture as an artistic control of his material is commendable in terms of knowledge and execution. Steering clear of pedantry, Merchant fuses interesting theoretical points about ragas and use of swaras and primacy of lyrics in a way that helps the reader focus on the truly positive aspects of the novel – memorable characters, an artistic structure and rejuvenating power of memory. The charm of nostalgia is infectious, Merchant indulges in it but the structure helps him in tapping the more positive aspects of memory and memory-digging.

His liberal use of Tamil words reads easy and natural in English. This is yet another remarkable aspect of this novel – and the writer’s first one, at that. Merchant’s writing is refreshing and holds great promise for Indian English fiction. Minor lapses like mistaking the ‘p’ sound for ‘b’ (it’s pottu not bottu for bindi in Tamil) or (mis)informing Revathy’s husband as her maternal aunt’s son – it’s considered incestuous – it had to be her father’s sister’s son – are just that- minor lapses though glaring to an insider reader.

Merchant’s artistic and economic use of his bilingualism strengthens his narrative. And he does it without self-consciousness and thereby brings in a freshness in English. And one thought that nobody could do this to Tamil/English after R.K. Narayan. If only Merchant would also imbibe the master’s realism to strengthen his own humane compassion for his characters, it would lead to great productivity. But as it stands, The Silent Raga is a compelling reading, absorbing and – let me be honest – cathartic.