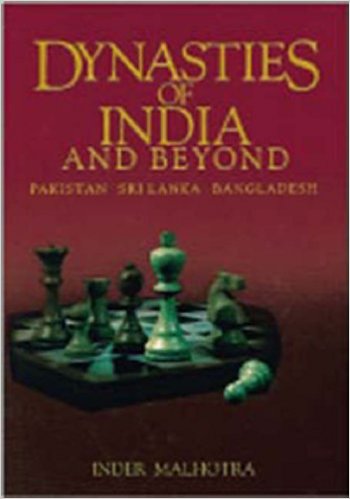 Although the Nehru-Gandhi family alone has dominated accounts on political dynasties so far, it is not the only powerful family/dynasty within India, leave alone South Asia. Indeed, the number of influential families striding the political stage in the region is rather large. In addition, dynasties abound in the world of industry, film, music and many other fields. Even as the Nehru-Gandhi family has attracted much attention in writings in India and abroad, none of the writers has tried to explain why the dynastic dispensation has taken such strong roots in this part of the world or why people vote for dynastic leaders time and again. Malhotra’s book fills this gap and does so without prejudice. He puts the rise of political dynasties in the countries of South Asia in a historical perspective, and he analyses why, in the Asian milieu, democratically elected dynasties are likely to last much longer than they did in the West. Though the Nehru-Gandhi family is unsurprisingly the centerpiece of the book, Malhotra puts the rise of each member of the family in context, therefore the account of this dynasty also becomes an account of politics in India over the past few decades.

Malhotra points at an interesting feature of the dynasties in the subcontinent — the dominance of women. As a general phenomenon, political dynasties are not unusual. What is less common is that women have dominated the dynastic phenomenon and have been the beneficiaries of their family’s political inheritance. It is indeed striking how many governments or opposition movements in South Asia have been, or are led by women given the fact that these countries are widely considered patriarchal and paternalistic in character. Why is it that women predominate in this dynastic succession? There is no doubt that the dominance of female leaders is linked to familial politics and to their being members of prominent families: they are all the daughters, wives, or widows or former government heads or leading oppositionists. But, paradoxically, this phenomenon exists independently of levels of economic and social development, cultural differences, and types of political systems. Many of these women leaders were selected as successors within the family because they were often perceived as apolitical and therefore an ability to symbolize non-partisan alternatives to corrupt (male) leadership. They appeared less threatening to potential rivals, who thus could support their leadership without sacrificing their own ambitions. Although they enjoyed a dynastic aura, it was expected that men would retain real control of the party, movement, or faction. The choice of Indira Gandhi to succeed Lal Bahadur Shastri documented so very well by Malhotra demonstrates this. In the feminist literature, the rarity of female leadership is commonly explained by the cultural construction of the role of women, which is traditionally based in the family. However, such a patriarchal ideology did not hinder women from achieving leading political positions in South Asian countries. In fact, an important reason for the rise of women leaders is that traditional stereotypes about their gender were not a hindrance, but proved to be to their political advantage.

Dynasties of India and Beyond is a sympathetic attempt at understanding a phenomenon that is an important part of subcontinent politics. Malhotra argues that dynasties exist because the people accept them and predicts that the situation is unlikely to change anytime soon. Apparently, popular will and democratic endorsement gives the dynastic phenomenon its strength and durability. Political charisma or mass appeal, however, is difficult to analyse since it is submerged in mystiques and myth that is greater than the sum of their ingredients. However, in the case of the Nehru-Gandhis the explanation is simply this: they reconcile the diversity and contradictions of India, and that they had for the most part constructed a multi-class, multi-regional alliance, which symbolized immense hopes and desires. Their appeal transcended caste, religion and region, something that is difficult to say of any other politician, family or dynasty in India. The rest are examples of family rule and inherited political leadership, rather than the dynastic phenomenon as such. Politics in India is personality centered and still a family business. The appeal of personality-oriented politics reflects the extraordinary gap between democratic expectations and the outcomes that politics routinely throws up. The practice of electoral democracy which seems so much about factions, patronage and identities on the one hand and persisting social inequality and the absence of any commitment to improve human development on the other enhance longing not so much for the traditional dynastic line of succession as for powerful personalities to bridge the gap. The critical issue therefore is not the popular appeal of dynasties, but the structure of opportunities in institutions and political parties that allow personalities rather than principle to dominate them. This point bears stressing because many of the critiques of modern Indian politics when it comes to thinking about institutional and policy perquisites that could make democracy more effective focus only on politicians, and not the remoteness and unresponsiveness of institutions, especially the lack of institutionalization of intraparty democracy in political parties. The less internally democratic a party, the more likely it is that it will be overtaken by personalized politics and dynastic rule. It suits party leadership to shift the focus to personalities and cynical faith in genealogies to divert attention from important and inconvenient issues. As in many other democracies, personalistic power in India at once created a viable political centre but dissipated institutional politics.

This book is a perceptive study of the complex phenomenon of dynastic rule and a fascinating and very readable account of the Indian subcontinent’s social and political history during the second half of the twentieth century.