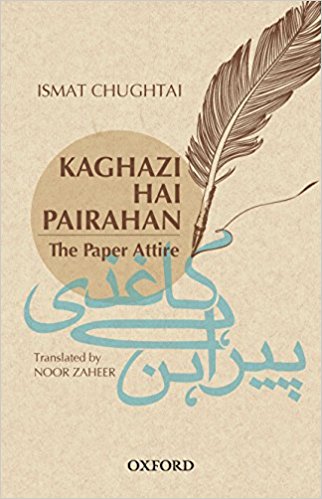 A handsome, new translation of Ismat Chughtai’s memoir, Kaghazi Hai Pairahan (KHP from henceforth), by OUP is cause for celebration in itself. To readers of Indian literature, Chughtai needs no introduction, given how lionized she is in multiple canons. Noor Zaheer, as translator, is more than a match for the verve of Chughtai’s style and this is a translation marked by ease and confidence. Zaheer’s method is appealing: she sandwiches the actual text of the memoir between a section that contains two essays on Ismat by writers Patras Bukhari and Manto, and three
essays by Ismat on Manto, Asarul Haq Majaz, and Khwaja Ahmad Abbas. What such a
move does is to position the memoir itself as a text that instantiates the artistic and creative process of Ismat’s writerly formation. Indeed, it is with such an interest that this reviewer approached the work and on this criterion, the book yields some fascinating insights.

KHP was a serialized work, first published in November 1970 in the Urdu journal Aaj Kal, with subsequent instalments coming out in the same journal between March 1979 and May 1980. A book version of the consolidated essays in Urdu came out in 1994 (three years after Ismat’s death) and later again, in the Devanagri script, in 1998, and since then, regular reprints in 2004 and 2007 (Rajkamal Paperbacks) testify to the steady popularity the book has enjoyed among Urdu and Hindi readerships. A Penguin India translation by M. Asaduddin in 2013, A Life in Words, was the first full-length version of KHP in English and it plugged an important gap in the Anglophone scholarship on Chughtai’s writings. A full-fledged comparison of the two translations (by Asaduddin and by Zaheer) is outside the purview of this review, but I would like to say that the introductions to the two versions tell us something of the visions behind the translations. Asaduddin’s introduction provides useful information regarding Chughtai’s trajectory as a writer of the Urdu afsana (short story) and as a pioneering female voice in Indian writing in general. Zaheer’s introduction, in contrast, provides little by way of historical detail but its ideological agenda is clear in its endorsement of Chughtai as a singular feminist voice responding to and shaping the dominant historical and cultural forces of her time. Zaheer rightly takes to task writers like Bukhari and Manto for their inability to separate gender from their personal estimations of Chughtai’s achievement as a writer, and it is this revisionist agenda that impels this new translation as a whole.

Chughtai’s memoir itself is episodic and in significant ways, runs counter to readerly expectations of autobiographical recall: there is no linear narrative that takes us from her childhood to adulthood and indeed, the fragmentary, vignette-like narration goes against a teleological understanding of Chughtai’s writing career. The telling is marked by several gaps and fissures, forcing a reader to pay close attention to the manner in which Chughtai writes. For instance, the individual chapters cover, in real time, a period of only two-three years when Chughtai came out of high school and joined Isabella Thoburn College for her B.A. But the chapters teem with flashbacks and flash-forwards, in a way thoroughly reminiscent of the style Chughtai employs in her fiction, and burst with the details of her life, relatives, friends, and acquaintances. Not only is KHP a vital document of its times, registering and recording the kinds of sweeping changes coming upon upper-class Muslim families that comprised the intelligentsia of colonial India, but it is also contrapuntally marked by a curious silence and circumlocution when it comes to its protagonist: the author herself. Indeed, what we learn of Chughtai, we must piece together in terms of how she is perceived by others and how she reacts to others, and regarding matters of love or her marital relationship with film-maker Shahid Lateef (with whom Chughtai also collaborated on films), little is said and even less gleaned.

The world Chughtai describes is marked by two sets of anxieties that one may, broadly, summarize as public and private: in the public domain, organized religion and religious strictures constrain individual desire, while in the private domain, gender structures the horizon of possibilities afforded, especially to women. The close, fractious interplay of these forces is shot through by Chughtai’s perceptive recognition of social class as an important co-ordinate of identity. She writes early on: ‘When I had to deal with the wider, bigger world, I realized that upper-lower caste, religions and races are all a form of hypocrisy; the reality is the class, the rich and the poor’ (p. 46). Scholarship on Chughtai that tends to focus almost exclusively on gender and sexuality would do well to look for the subtle and observant ways in which Chughtai’s writings present a trenchant class-based critique of social relationships.

Of interest is also Chughtai’s language in the memoir: it is by now a cliché to evoke the form of the begumati zubaan when discussing Chughtai’s writing style, but the memoir is also a profoundly textual–literary creation. Chughtai deploys multiple voices to bring alive the people she is surrounded by and snippets of poetry from Urdu and Hindi, as well as strategic discussions of Indian and world writers and thinkers present her as a self-aware, increasingly individual voice in the making. Her early disavowal of the romantic mode in Hijab Imtiaz Ali’s novels and the lessons she learned from English and European literatures in the colonial classrooms of Isabella Thoburn College provide a way to think of Chughtai’s language as more than a ‘natural’ reflection of her milieu, a romanticized reading of begumati zubaan that Manto approvingly, but misleadingly, locates as the unique point of Chughtai’s style. Indeed, the chapter ‘Locks’ provides excellent evidence of the ways in which Chughtai can deploy circumlocution, volta, and delayed decoding to sharpen the effects of the unsaid in language.

In this context, it may be useful to examine Chughtai’s choice of title for the memoir (a point curiously ignored by both translators in their introductions): Kaghazi Hai Pairahan is a phrase that occurs in Ghalib’s well-known opening ghazal in the collection Diwan-e-Ghalib. One way of reading the couplet1 is to see the paper attire as a symbol for the ‘traced letter’ that is expressive and subversive, that betokens a sensibility native to the speaker as well encodes her subtle complaint against her time and
culture. Such an ambivalence goes to the heart of Chughtai’s self-presentation in the memoir which makes multiple contradictory pulls upon the reader. As one reads, one realizes that the memoir is greatly invested in creating the figure of young Chughtai as a rebellious, iconoclastic girl who grew up to be a trend-setting writer at a time when only a few women (especially Muslim) were literate and gifted enough to carve a name for themselves. This is a view of Chughtai that is shared by a number of scholars for whom she remains a major icon among Indian writers and rightly so. Nonetheless, the narrative’s evasive techniques, slippery modes of self-presentation, and a fairly monological rendering of Chughtai as iconoclast/enfant terrible do raise interesting questions about the very form of the memoir and its links to veridicity. As Zaheer astutely notes at the end of her introduction, ‘Maybe [Chughtai’s] fiction was autobiographical and her biography was a piece of fiction!’ (p. 13).

In sum, Zaheer’s translation is a very useful addition to Chughtai scholarship, and for serious researchers, the ancillary materials will be of value.

Anupama Mohan is Assistant Professor of English at Presidency University, Kolkata. She is the author of Utopia and the Village in South Asian Literatures (Palgrave Macmillan, UK, 2012) and Twenty Odd Love Poems (The Writer’s Workshop, 2008). Her articles on postcolonial theory and literatures, critical philosophy, and cultural studies have featured in academic peer-reviewed journals such as the University of Toronto Quarterly, Postcolonial Text, and Intersections, among others.

1 The lines where the phrase occurs are: ‘Naqsh faryaadi hai kiski shaukhi-e tehreer ka/ Kagazi hai pairahan har paikar-e tasveer ka.’ Considered among the most poly-semic of lines in Urdu poetry, it would be hard to arrive at a single translation, so one can only speculate about the general import behind Chughtai’s choice. A potential translation suggested by Iranian-Persian Studies scholar Prashant Keshavmurthy is: ‘Of whose brazen writing is lamentation a sign?/ Every traced letter wears its complaint.’