The Story of Transnational Islam 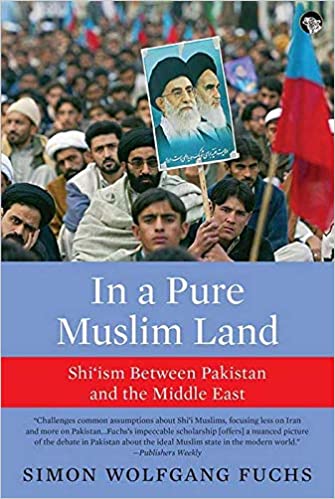 The Story of Transnational Islam
Julien Levesque
IN A PURE MUSLIM LAND: SHI’ISM BETWEEN PAKISTAN AND THE MIDDLE EAST by Simon Wolfgang Fuchs The University of South Carolina Press, Speaking Tiger, 2019, 376 pp., 599.00
June 2020, volume 44, No 6

The South Asian subcontinent counts a significant Shi’i population, with Pakistan having the word’s second largest number of Shi’is. Yet it has so far received limited scholarly attention. This book, adapted from the author’s PhD dissertation, contributes to a growing literature that seeks to fill this gap (Jones 2011; Rieck 2015). Located in the field of intellectual history, Simon W Fuchs’s work focuses mainly on religious literature (in Urdu, Persian, and Arabic) produced by Shi’i ulama in Pakistan. This concentration on ideas differs from approaches that give preference to other aspects in their study of South Asian Shi’ism, such as institutions, interests, rituals and their meanings, or sectarian tensions. Instead, Fuchs argues that doctrinal debates among Shi’i scholars, or ulama, have much to tell us about Pakistani Shi’ism and its relation to both the state and global religious centres of Shi’i learning in Iraq and Iran.

The book follows a chronological outline to show how discussions among religious specialists, far from being mired in arcane technicalities, are part and parcel of the major socio-political issues that Pakistani Shi’is have faced in the twentieth century. The first chapter on the late colonial period highlights divergences among Shi’is towards the project of Pakistan, as some denounced it ‘as an oppressive vision of a Sunni Islamic state’ (p. 17). The second chapter examines post-Partition debates between reformist scholars and traditionalists, as Pakistani Shi’is were now cut off from South Asia’s main Shi’i learning centre, Lucknow, but not as side-lined as they might have feared in the new country.