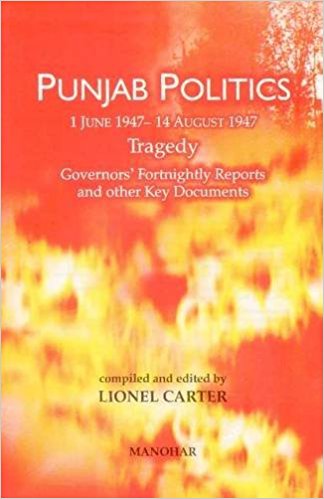 The partition of India is once again big news. Last year the BJP stalwart, Jaswant Singh in Jinnah: India-Pakistan-Independence, New
Delhi: Rupa and co.), was summarily expelled from the party for daring to suggest that it was the intransigence of leaders like Nehru and Patel that compelled Jinnah to go down the road of a separate homeland of Pakistan for Muslims of India. Simultaneously, Ian Talbot and Gurharpal Singh’s The Partition of India (New Delhi: Cambridge University press, 2009)* put forward a refreshingly new approach that calls for a serious reconsideration of the conventional position that the British were reluctant partitionists whose hands were forced by the Congress and Muslim League politicians. And this volume by Lionel Carter throws a welcome light on the thinking of the local regime in Punjab on the eve of partition, namely Sir Evan Jenkins, the last Governor of Punjab.

Although much of the material in this volume has been accessible to professional researchers for some time, this volume completes the series of reproduction of Governors’ Fortnightly Reports from Punjab. Carter has intimate knowledge of these documents. Before retiring he worked at the Centre for South Asian Studies at the University of Cambridge, and before that he was part of a team that published the Transfer of Power series. This volume covers the crucial period from the announcement of the June 3rd award to the eve of partition. It consists primarily of the correspondence between Sir Evan Jenkins and Lord Louis Mountbatten and his office during the intensely charged months of June, July and August 1947. While Jenkins tried desperately to hold the Punjab administration together, he was buffeted not only by the strong turbulence unleashed in Punjab by the Muslim League, Congress and Akali politicians, but also the directives from Mountbatten to prepare adequately the groundwork for partition in circumstances in which Punjab politicians were unwilling players. The results predictably were a disaster in which the human dimension of statecraft was washed away in the bloody birth of two independent countries.