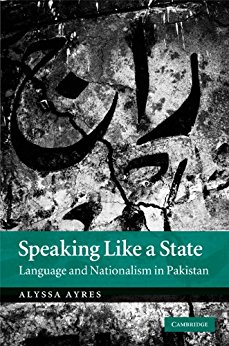 Alyssa Ayres’s 217-page book is a mas-terful exposition of the role that language has played in ‘engineering’ the ‘idea of (modern) Pakistan.’ Divided into ten chapters, Ayres fleshes out Pakistan’s experience with the Urdu language, used by the state as a means to justify the ends of nationalism and national unity in what came to be known as Pakistan post the partition in 1947. As the author herself states, the study has been driven by a desire to examine why the role of Urdu language in building the nation-state of Pakistan has received a ‘less than central focus in academic analysis of Pakistan’ despite the fact that the country has been plagued by cultural-linguistic challenges emanating from within its four provinces, almost immediately after its birth in 1947. By doing so, the book raises critical questions regarding the call for a homogenous language in order to create a nation and thereby national belonging to its peoples.

While the idea of a national language occupies a central position in defining the identity of a nation, Ayres’s work suggests that Pakistan, in its quest to locate its historical and cultural origins in West Asia as opposed to South Asia, may have indeed taken this idea too far.