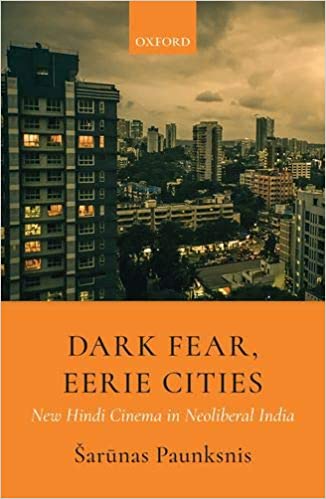 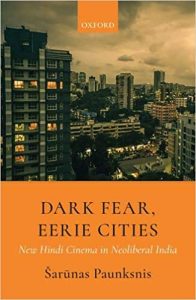 The book Dark Fear, Eerie Cities analyses a particular strand of Hindi films from the past two decades and through them leads us through a fascinating enquiry into the sources and manifestation of desire, anxiety, fear and neurosis in the new Indian middle class that began to emerge in the early 1990s when Indian economy opened up. The strand Šarunas Paunksnis chooses is composed of films that expose the dark underbelly of urban life, revealing an India that is an antithesis of the image of the ultra modern, global city that Neoliberalism constantly advertises.

Paunksnis clearly states in his introduction that ‘[t]his book should not be understood as a “film studies” book but as a much broader investigation in the philosophy and sociology of transforming neoliberal India’ (p. xiv). The author does well to stay steadfastly on course, not slipping into delineating the cinematic qualities of the films but keeping his focus on their psycho-socio-spatial aspects. Analysing films such as NH10 (2015), Ugly (2013), Highway (2014), Ek Hasina Thi (2004), Phobia (2016), he unpacks and exposes a society in flux, a society in which individuals of the middle class are trying to forge new identities for themselves, trying to find and play the role of the global citizen. Gated high-rise apartment complexes, shopping malls, multiplexes and flyovers define their space where they live their dream of having a world-class standard of living.