The Scope and the Context 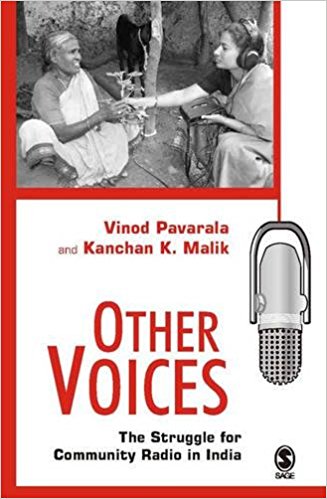 The context of Community Radio differs from country to country and the communities therein. In the West it started as political propaganda machine and this was called pirate radio, since airwaves were considered government property or state property. Even in the twenty-first century it is not public property in the true sense. But now the concerns are not state control, but as the authors of the book Other Voices: The Struggle for Community Radio in India have stated: ‘Freedom of expression and equitable access of communication media are gravely threatened in the twenty-first century, not by excessive use of state power as in earlier period, but rather from the unhindered growth of media organisations into large-scale conglomerates.’ The book contains eight chapters, including the introductory and concluding chapters. Chapter 2 compares community radio policies of five countries—Australia, Ireland, South Africa, Canada and USA with a view to understand the contours and content of progressive state policy that promote democratic media.

Chapter 3 traces the growth and development of broadcasting in India from a media policy perspective and attempts to probe within the historical and contemporary contexts, the issues, dilemmas and political realities associated with opening up of radio broadcasting for the non-profit social sector, Chapter 4 offers detailed profiles of the NGOs and their four community radio initiatives—‘Chala Ho Gaon Mein’ of Jharkhand, ‘Ujjas Radio’ of Gujrat, ‘Namma Dhwani’ of Karnatka and ‘Sangam Radio’ of Andhra Pradesh—that were examined in this study. Chapter 5, 6 and 7 are thematic chapters that knit together the empirical observations and analysis of case studies of community radio initiatives with the theoretical insights. This book has also four useful Appendices of important court decisions, declaration and recommendations related to the subject. In the concluding chapters the authors have also made recommendations for a policy on community radio, which are very useful.

Out of four community radio initiatives studied by the authors, the two in Jharkhand and Gujarat have some sponsored slots of All India Radio Stations, the one in Karnatka has taken the cable root to broadcast the programmes through TV sets and the one in Andhra Pradesh has developed all itscapabilities to broadcast radio programmes though its own transmitter, but waiting for the license from the Government; meanwhile, they are playing their recorded programmes in the community meetings. (Incidentally, now this community radio named as ‘Sangam Radio’ has started broadcasting since 15th October, 2008 and is first in the NGO sector, apart from the campus radio of educational institutions. Another such community radio from Orchha in Madhya Pradesh in the name ‘TARA Gram’ started its broadcasting in the same month.)

It is difficult to draw generalist con-clusions based on such small size of samples with such small area of operations. It is also difficult to assess the impact of community radio broadcast on the community it was started for. However, the research methodo-logy adopted by the authors is quite scientific and whatever little they could infer from their study will serve well for future studies.

The authors have made references to all possible sources on this subject and have also given a comparative study of the status of community radio regulations in Australia, Ireland, South Africa, Canada and USA. But they have failed to assess the scope of community radio in the Indian context.Not only rural India and the rural poor are marginalized by mainstream media, but there are other communities which make a strong case for community radio. Migrant labourers in various urban locations in different states who form a community of minorities on the ground of language, neglected professionals and artists who are marginalized by the established and well connected artists, authors and writers who are not represented through any established electronic media and many more such groups may find community radio an effective tool of expression.

As a broadcaster with the background of classical music, I have always felt that a community radio can give the stage to the artists who do not get a chance to perform in All India Radio and in established music festivals of India. Especially in the northern part of India, where unlike southern India, stage and audience are not easily available to upcoming artists. This kind of initiatives will enrich the musical tradition of India. This will also ensure a minimum financial support to the artists who are otherwise living in misery like any other poor farmer or artisan of rural areas. Kashmiri Pundits, Hindi speakingminorities in Assam, migrant labourers in Punjab, Tibetans in Delhi and many such communities can voice their concerns through community radio.

The scope of community radio in urban areas should also have been taken note of in this book. Human migration is related to socio-economic conditions in rural areas and it is also related to uneven distribution of wealth and resources of the state.

The concept of community radio is more than broadcasting (or ‘narrowcasting’assuggested by the authors). It propels the stakeholders to form a cooperative which ultimately gets converted into some kind ofbusiness model through which a sort of sustainability is achieved.

The authors in association with likeminded peoples and organizations have made many recommendations on community radio broadcasting. As per global trends they have recommended the creation of a three-tier system of broadcasting in the country—a state-owned public service network, commercial private broadcasting and non-profit, and people owned and managed community radio stations. They have given many useful suggestions for prioritizing the applications and licensing processes but there are many issues which need serious reconsideration from both the parties to this dialogue on community radio—pressure groups of community radio, such as authors Vinod Pavarala, Kanchan K. Malik and the Government. Why should an applicant be a registered NGO or civil society with minimum three years of ‘proven’ track record?‘Proven’ track records most of the time constitute nothing but well drafted reports and minutes of ‘meetings’ and audited accounts. Many NGOs are, no doubt, doing a good job as many government agencies are doing in rural and backward areas, but at the same time many NGOs lack credibility and are using their banners to pocket funds from government and other donor agencies. Why cannot real people’s initiatives be considered on merit for such licenses? One more thing: why is profit earmarked for capitalist forces, why cannot community radio become a source of income for the stakeholders? Why do we expect community to do ‘charity broadcasting’ or ‘sponsored broadcasting’ only? We should debar business groups from entering into the community radio set-up, but without a business model no community radio set-up can survive for long or produce quality programmes. We need to be more creative and practical in making recommendations for community radio.

The need of the hour is for the state to turn pro-active towards community radio. In a phased manner the government should develop community radio set-up in every block of this country, which can be used by different community and NGOs as also forbroadcasting their content without manipulating funds and without waiting for licensing procedures to come through. Management of all such community radio centres should be given to a committee consisting of local elected representatives, members of local school administration, local representative of NGOs and representative of nearby AIR stations. This will form a responsible set-up that can work as local regulator, technical support group and also as content advisors to the community radio.

Classification of community radio is also a very important issue, since definition and framework of various entities of ‘social sector’ and ‘community’ are quite distinct. Penetration of local radio in rich educational institutions and mass communication centres cannot be seen as real growth and development of the community radio. The whole struggle of community radio services is to have the voices aired of people who are just passive consumers of modern communication tools and technology. The definition of community in social context is also very difficult and one has to be very careful while setting up such a community radio. Conflicting interests of various sections of some community may cause more damage than good to the society. Such issues should also have been discussed in this book.

There is always some scope of improve-ment and additions in such endeavours, but this book, no doubt, fills the gap of a serious intervention in such an important issue of modern informed society. The era of one-way communication must go and respect for the audience at every level and inclusion of local content in its totality must be ensured in any form of media enterprise. The authors are vey right in saying,Participatory communication advocates that media technology can become a full partner in the development process only when the ownership of both the message and the medium—the content and the process—resides with the communities.’ And also ‘. . . Radio, as post-literate and inexpensive medium, becomes the only link to the outside world for the poor and deprived communities.
Let airwaves be of the people for the people and by the people.