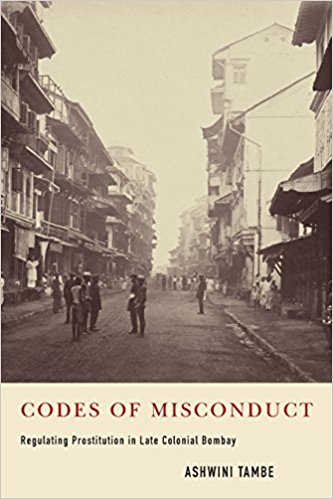 Bodes of Misconduct tells us the story of how through the nineteenth and early twentieth centuries, the colonial government in Bombay city passed a series of laws against prostitution. Many of these laws, strangely, were repetitive and seemed to cover the same ground over and over again. In the meantime, Bombay saw a massive expansion in sex-trade, and soon came to be seen—both globally and nationally—as a critical node in the international network of trafficking in women. It would appear that colonial laws, like many postcolonial laws, were either not honestly implemented or were simply impossible to implement. Ashwini Tambe, however, tells us that such a commonsensical reading is not just naive but in fact misleading, for it misses the very point of the story of law-making, reform and sexuality in colonial modernity.

Tambe studies laws on prostitution not only for the sake of the prostitute. It is true that the prostitute works as a particularly intractable figure in modernity, because she disrupts the ordering regimes of modem civic life founded on binaries such as the public/private and the felon/victim.But Tambe also studies laws for the sake of law as such; and for her, the prostitute offers a critical entry point into the story of the many lives of law. She argues that law must be understood not in terms of its ‘success’ in prohibiting what it seems to prohibit, but precisely in terms of the mismatch between letter of the law and the implementation of it. For modern-day laws are intended to do two things simultaneously —one, establish the realm of law-making as the privileged site of public contestation, sometimes as substitute, sometimes as supplement to the realm of politics itself; and two, constitute newer channels of state intervention through the production of newer laws and correspondingly newer crimes and newer forms of discipline arid surveillance. The story of prostitution and law-making in Bombay must be read in this light.