The Sage of Thiruvannamalai 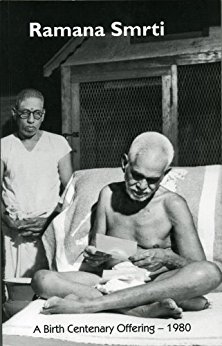 It is not often that we come across a noble theme explained by a worthy writer in a lucid manner. This book definitely belongs to this rare category. It is most appropriate that the National Book Trust should have asked Professor Swaminathan with his life-long devotion to the Maharshi to write this book on Ramana. Many people may not know that when Professor Swaminathan came to Delhi in 1960, when he was already past sixty, he had set his heart on two important tasks. One was the officially assigned business of editing and publishing The Collected Works of  Mahatma Gandhi. The other noble mission was bringing home to the people in the north the message of Ramana. Today he has the satisfaction of having completed both the tasks. The Ramana Kendra of Delhi, a unique institution, owes its existence mainly to his tireless efforts. The book falls into two parts. The first deals with Ramana, the man. The earlier years of the boy, Venkataraman at Tiruchuzhi and Madurai, leading up to the great event at the age of sixteen when a mere boy became transformed into a seer and his subsequent going away to Tiruvannamalai, his tranced years there as a Brahmana Sanyasi, the gradual transition to the normality of a human being while retaining his liberated status, the growth of Ramanashram around him, the flocking of disciples and his method of dealing with them—all these are explained clearly.