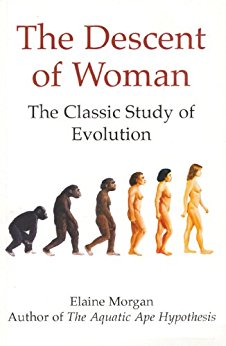 ‘She was there all along, contributing half the genes to each succeeding generation. Most of the books forget about her for most of the time. They drag her on stage rather suddenly for the obligatory chapter on Sex and Reproduction, and then say: ‘All right, love, you can go now,’ while they get on with the real meaty stuff about the Mighty Hunter…’ In this vein Elaine Morgan, a graduate of Lady Margaret Hall, Oxford, in English literature entertains, startles and informs the mind throughout the 280 pages of this gripping book. She refers to learned books and eats up their ideas and their evidence with her dogged determination to trace the ancestry of the human race. This is how she describes the story of human evolution as it stands now. ‘Smack in the centre of it remains the Tarzan-like figure of the prehominid male who came down from the trees, saw a grassland teeming with game, picked up a weapon, and became a Mighty Hunter.’ There is something about this Tarzan figure which has them all mesmerized.

From chapter to giddy dazzling chapter she proceeds to develop her thesis that the Tarzanists are wrong. Our first move is not from the trees to the plains, but from the trees to the water. From the Miocene period where the weather was mild, heavy rainfall, flourishing forests and our ancestor could have been a gibbon or a gorilla, researchers take us to the Pliocene drought which lasted twelve million years. What happened to us along the way? Elaine Morgan calls this the 64,000 $ question. ‘What happened to them? Where did they go?’—to the water of course, led by the female. In the next nine chapters she takes up questions usually discussed by the evolu­tion theorists, shakes them vigorously, drops all the loopholes one by one. It is best to quote her endlessly as her style is inimitable.