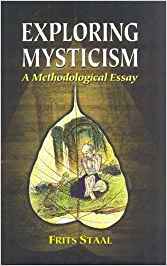 Many of us have on occasion been dubious about the obsession in some circles to explain Indian culture entirely in terms of mysticism. This analysis by Staal of how to approach the study of mysticism is most valuable in that it not only puts the matter into a new perspective, but also because it suggests that the com­prehension of the phenomenon so far remains inade­quate. The book does not deal with Indian mysticism per se although his own interest in the subject is reflected in the discussion. As he himself puts it, ‘ … this essay deals primarily with the exploration of mysticism, not with mysticism itself. It reviews the methods by which mysticism is generally studied, and it explores methods by which it can be studied more fruitfully.’ He begins with the assumption that the study of mysticism is unsatisfactory and that what is primarily required is a totally different approach to the study.

His dissatisfaction stems from the fact that the study has not so far been carried out on rational lines and thus an important dimension to the study of the theory of mind is lacking. For him such a rational analysis is not a contradiction in terms, as it has generally been held to be, but the only way in which a complete understanding can be obtained of the processes involved in mystical experience. The refusal in the past to rationally analyse mysticism was largely the result of prejudices concerning its supposed innate irrationality.

In the first part of the essay Staal examines some of these prejudices in what he calls the alleged irrationa­lity of mysticism. He draws on the mystical tradition in Christianity and Buddhism to indicate that mystical experiences can be subjected to rational analyses. This is an interesting departure from the earlier position when the entire experience was dismissed as incapable of such analyses. Some might argue of course, that in choosing Buddhism as the example of ‘Oriental mysti­cism’, he is in a sense simplifying his problem, since Buddhist mysticism emerges from a philosophical base which is more easily analysed in rational categories than that of many other ‘oriental’ philosophies. How­ever the evidence which he draws upon is sufficiently widespread to make such an argument look like nit­picking.

In the second part of the essay he develops on his dissatisfaction by examining the evolution of the preju­dices from many disciplines and by discussing how not to study mysticism. Here he does a critique of a variety of approaches, what he calls dogmatic approa­ches, philological and historical approaches, phenomen­ological and sociological approaches and finally physi­ological and psychological approaches: in effect virtually every important stand on mysticism is brought under discussion. The attitude emanating from some religions such as Christianity and Islam where mystics were frequently treated as heretics are juxtaposed with those religions where mystical experience is regarded as a natural fulfillment of faith. Many of the approaches have been inadequate because the understanding of the text is confined by a lack of experience of what is being described.

On the sociology of mysticism he draws on earlier suggestions that in Indian society the mystic has been the one invested with individuality and the consciousness of living in isolation. Non-mystics tend to live in co­rrelation with other components of society and see themselves not as individuals but as part of a social whole. The consciousness of individuality is emphasi­zed by salvation religions such as Christianity and Buddhism. On this question it might be worth doing a comparative study of early middle-eastern or Chinese society before the imprint of Christianity and Buddhism, to ascertain the degree to which individualism in society was alien to social activity. The powerful tradition of mysticism in Islamic culture might suggest that the existence of a salvation religion did not preclude the search for an individuality outside society. Yet the ultimate goal of the mystic is to transcend and annihi­late the consciousness of being an individual in isolation.

In the third part of the essay on how to study mysticism, Staal is firm on the point that the study must be associated with at least an attempt at personal experience. This requires a suspension of doubt which for those trained in the Cartesian tradition is undoubte­dly difficult. The personal experience of mysticism requires a particular discipline of body and mind which is not too easy. Above all it requires the practice of detachment (which may mean going into isolation or may imply the breaking of social taboos) and even­tually, degrees of meditation. All of this is characterized not by a condition of withdrawal (which has often been seen as a life-negating principle in the past) but a condition of heightened perception and awareness. Another prerequisite of the experience is the need to be instructed by a guru or the equivalent thereof, and this appears to be a universal requirement in all forms of mysticism; stressing thereby that the practice has to be meticulously and arduously learnt and that there are no short cuts. Even in societies where the use of halluci­nogens is permitted (and this is by no means universal) they have to be taken under careful supervision and not with the intention of quick or casual ‘trips’. This would be apparent to anyone who reads the account of Carlos Casteneda and the Yaqui tradition. The insist­ence on a genuine personal experience of mysticism might deter many who would otherwise be interested in investigating the phenomenon. But one can under­stand why Staal is so insistent since the process in itself is so different from other more easily acquired experiences.

One aspect of mysticism, perhaps on the whole not central to mystical experience, which the author might have examined more fully is the question of what have been called non-conformist techniques of arriving at knowledge. In the Indian tradition, Yogic and Tantric literature (among others) refers to these techniques and the justification of the search for such knowledge is often given as the need to transcend the human condi­tion. The widespread interest in alchemy, almost universally attested to, is suggestive of this. The interest in non-conformist knowledge, and in techniques used in comprehending knowledge, brings us back in a way to the initial point of the book—the possibilities of the rational analysis of mysticism. Joseph Needham’s exploration of Taoism in China indicates that many of the types of knowledge gathered into what was regarded as an irrational tradition was at the basis of what we call proto-science. Staal’s plea for not condemning mysticism as irrational and trying instead to analyse the structure of mysticism in various cultures may well result in a useful separation of the grain from the chaff, in what goes under the label of mysticism.