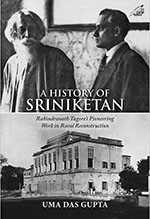 Born into a wealthy family in Calcutta in 1861, there was very little scope, so to speak, in Rabindranath Tagore’s childhood years for experiencing country life first hand. It was only in the 1890s, after Tagore was well past youth, that he was tasked with the supervision and management of the family’s (zamindari) estates in the rural areas of eastern Bengal. Based in Selidaha/Shilaidaha, the headquarters of the Birahimpur estate (in the then Nadia district) located on the bank of the mighty river Padma, Tagore’s long stint in the Bengal countryside gave birth to, as most of us know, some of his finest literary creations. But what many of us may not be aware of is that the lengthy sojourn was the city-bred Tagore’s first direct experience of village life—featured as it were by glaring poverty and misery of the peasantry—and which planted the seed of the Institute of Rural Reconstruction (IRR) he would eventually establish in Sriniketan, situated in the Birbhum district of western Bengal, in 1922.

Tagore’s unease with the dismal state of India’s villages turned him, as Uma Dasgupta writes in the blurb of the book under review, ‘into a man of action’. Economic development of the villages was, needless to say, the primary objective of Tagore’s Sriniketan-IRR experiment but ‘there was [also] the “other” no less important goal of bringing joy to the lives of the village people. He knew intuitively that poverty was not the only problem; unhappiness was also a problem’ (p. 9). Indeed, similar to the famous Santiniketan experiment, the one concerning rural reconstruction in Sriniketan-IRR too aimed at the holistic development, without being unmindful of the Indian cultural context though, of the individual villager and the village.