Social and Cultural Impact of Paper on the Mughal State 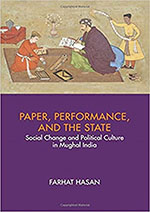 As per the recent research, the earliest remains of paper found in India are from early 11th century Multan. By the end of the 13th century, if one believes Amir Khusrau, it came to be manufactured even in Delhi; however, its production and its general availability was so limited that, as per Ziya Barani’s information, the paper would sometimes be washed and re-used for writing again. By the time the Mughals appeared on the scene, one gets reports of ‘paper mills’ or ‘paper manufacturers’ spread across Kashmir and Punjab in the north, to Bihar and Bengal in the east, and Gujarat and Daulatabad in the west and south. By the reign of Shahjahan, we have texts dealing with household management which give details of how to manufacture different types of papers. Some European accounts too refer to paper making by common people, not in any way related to the imperial household or aristocracy.

The book under review describes the social and cultural impact of paper on the Mughal state and seeks to locate the agency of this Mughal state in the changes which were being shaped and reproduced.

The author in his Introduction points to the ‘impressive expansion’ in the use of paper, ink and pen in state activity, and calls the Mughal Empire, ‘a vast paper regime’. As suggested by the blurb on its back cover, this work first explores the changing socio-cultural world in early modern South Asia. Second, it claims to unravel ‘the opening up of new spaces of social communication’ due to innovative terms of engagement between literacy, performative and oral traditions. Third, it also tries to adopt ‘the state-in-society’ approach, and ‘reposition’ the state within its social field.