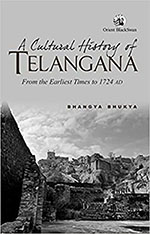 Bhangya Bhukya, Professor of History at Hyderabad University, has written an engaging textbook on the history of Telangana.  The book weaves a socio-economic and political history of the Telangana region from the prehistoric times to 1724 when Mughal control over the Deccan came to an end. In his book, Bhukya underscores the importance of writing a history of the South, shifting focus away from the Gangetic region that dominated orientalist writings in the nineteenth century and continues to shape historical writings. He also contends that scholarship on the Deccan post-Independence merged the historical experiences of Andhra Pradesh and Telangana, sidelining the significance of the latter even though ‘all the major dynasties of the Telugu region ruled from Telangana’ (p. ix). According to Bhukya, ‘the Andhra region was always a periphery of Telangana, but their positions were reversed in history textbooks’ (p. ix). Bhukya seeks to rectify this glaring discrepancy.

The author begins by exploring how the physical landscape, particularly the rivers Godavari and Krishna, along with climate and geology shaped the socio-cultural evolution of Telangana. The terms ‘Tilinga’ and ‘Telangana’, for instance, were derived from ‘Telivahana’, a term most likely used by Buddhist monks for the Godavari river. The book gives a detailed survey of the paleolithic, mesolithic and neolithic sites in the Telangana region. The megalithic culture in the region, marked by the use of iron, agriculture, burial culture and polished wheel-made pottery, has been succinctly described. Bhukya argues that the region benefitted from the availability of iron ore which resulted in iron-production, in addition to a vibrant crafts industry (copper, bone, shell, horn) from the pre-Satavahana period itself.